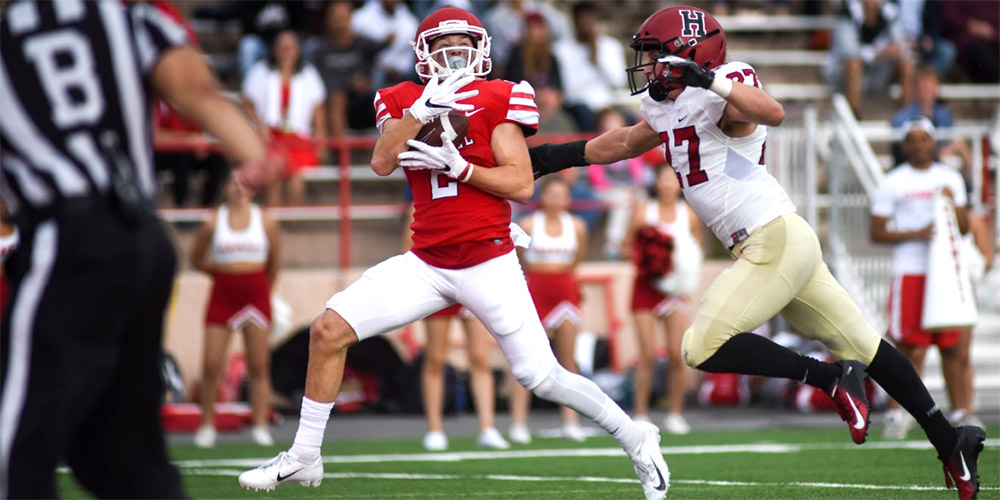 Call it a rivalry based on earned confidence in Cambridge or call it the little brother mentality in Ithaca. No matter what you called it, this rivalry has seen Harvard long reign supreme over Cornell — on the gridiron, in the national rankings and, most palpable of all, in the self-deprecating jokes.

But in regards to the first aspect, that may be changing.

Before last season, Harvard was victorious in 11 consecutive contests over Cornell football, with the last win coming in head coach David Archer’s ’05 senior season. But after Saturday’s come-from-behind 28-24 win over the Crimson, the Red is now the one who owns the winning streak in a bitter rivalry that extends far past the football field.

“What I like about the rivalry is that they have been the class of the league. You always have to play your best against the best, and that’s what those guys have been,” Archer said. “And I say that with a ton of respect. [They] are classy people. … To be able to beat them is good. There are teams in this league I don’t respect, and Harvard is one I have the utmost respect for.”

The Yale Undergraduate Sports Analytics Group gave Cornell a 38 percent win probability on Saturday. Last year, Harvard was an 18.1-point favorite. But after scoring 14 unanswered points in the fourth quarter Sunday, it is Cornell which now owns a win streak with two mathematical upsets in a row.

“It’s not an upset to us, and we don’t really care what the outside world thinks who’s supposed to win,” said senior captain and linebacker Reis Seggebruch, who led Cornell in the win with 11 tackles — 2.5 for a loss — and two sacks. “We go into every game with the mentality that we are going to win.

“I told the guys the underdog didn’t win today,” Archer reiterated. “In my book, two in a row is a streak.”

A punt returned for a touchdown began it and a 33-yard catch by a player with only six total receiving yards on the year entering Saturday ended it. No matter the method, Cornell had, by final whistle, come from behind yet again to defeat its rival.

“Two years in a row. We knew we could do it, and we needed it,” said junior wide receiver Owen Peters, whose 33-yard touchdown sealed the victory.

Run-first has been Cornell’s offensive gameplan the whole season, but a loaded box by the Harvard front seven forced a change in scheme. Instead, the air attack dealt the final blow.

“Our receivers coach [Jordan Hogan] was telling us all week that we are going to run the ball, so be patient. You’re going to get paid,” said Peters, who had five catches for 112 yards. “All our receivers just trusted the offense, stuck to it and made the plays when we needed to.”

Likewise, stopping the run was once again the forecasted key to victory for Cornell. Instead, the pass defense prevented the Crimson from ever putting the game out of reach.

Aaron Shampklin ran the ball down Cornell’s throat for 191 yards on the day and a touchdown, but the Red’s secondary kept the Harvard receivers under 140 yards and forced the Crimson to change quarterbacks as halftime loomed. The change in personnel didn’t change Harvard’s on-field product in the air, unaided by losing do-it-all All-American Justice Shelton-Mosley in the first quarter with a leg injury.

“If I had to pick [whether to have] him go down in the first half or not, I’m obviously going to say no. You hate to see anybody get hurt. … We’re kind of all in this together,” Seggebruch said. “But it definitely helps. We gameplanned for him, he’s an incredible athlete. Him not being on the field definitely helps our defense.”

“I’m sure it took some offensive firepower from them,” Archer added. “You don’t wish it on anybody. Even if you’re playing an opponent, you want them to be at their best because it forces you to be at your best.” 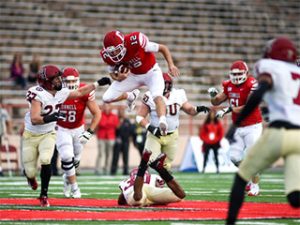 Harvard scored on the first drive of the game and a punt-fest ensued for the following eight drives before Cornell senior quarterback Dalton Banks was picked off while firing deep in Harvard territory.

Five plays after Cornell’s first turnover of the season, on the ninth punt of the game, luck finally turned.

Junior receiver Dylan Otolski broke through the Crimson line and blocked a punt off the foot of Jon Sot. Junior linebacker Justin Bedard scooped up the ball for the 15-yard score to finally put the Red on the board with 4:53 left in the first half.

“That was the spark we needed,” Archer said.

Three of the next four scores belonged to the Crimson, all of which came with starting quarterback Jake Smith being relegated to the bench in favor of Tom Stewart, who, before Harvard’s loss to Rhode Island last week, hadn’t thrown an in-game pass since 2016.

Sandwiched in the Harvard onslaught was a 32-yard rushing touchdown from junior quarterback Mike Catanese on the Red’s second drive of the third quarter. The junior kept the ball for himself on a read option for his third touchdown of the season to temporarily tie the score at 14.

After a Harvard field goal, Stewart found Henry Taylor for a 29-yard strike and Harvard ultimately capped off its run with its lead ballooned to 10 and 10:13 left to play.

That’s when flashes of Banks from his all-Ivy honorable mention sophomore season forced their way into Archer’s head. 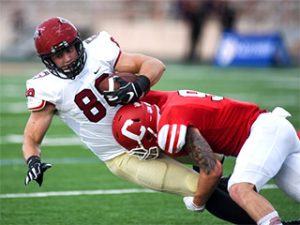 Catanese started the ensuing drive with a six-yard rush and added a short gain with his feet a few plays later, but it was finally Banks’ time to shine. The senior found Peters for a 10-yard pickup to encroach on midfield, then found sophomore receiver Eric Gallman and Peters again for another pair of double-digit pickups.

It was a forced deviation from Cornell’s run-first gameplan this season. Harvard loaded the box all day long and held the Red to just 155 yards on the ground. But junior running back Harold Coles was able to cap of the drive doing what he — and the Cornell offense — does best with a 34-yard touchdown run to bring Cornell within three.

After a Harvard three-and-out and a weak punt from Sot had the Cornell offense on its own 37, Banks and the offense had a chance to build on the prior drive. Only this time, the Red flipped the script from the previous series.

Catanese and Coles combined for 30 yards on the ground to open the drive, then Banks stepped right back under center. On 1st and 10 from the Harvard 33, Banks faked a pass to senior running back J.D. PicKell, drawing the defenders just enough to allow Peters to break past his man.

In front of 8,040 roaring at Schoellkopf, Banks’ pass soared 33 yards right into the hands of Peters to cap off the wideout’s career day.

“He’s having fun,” Archer said of what he noticed in Banks’ clutch final drives, bring back memories of Cornell’s shocking comeback win over Colgate in 2016. “He’s enjoying his teammates, not feeling the weight of the world on his shoulders or something. He’s just playing ball.”

Two offensive drives with 4:30 to play were not enough for the Crimson, despite humming along on the final drive. On fourth down, a pass from Stewart under immense Cornell pressure fell right through the hands of an open Taylor, making the loss of Shelton-Mosley all the more palpable.

“All week we were saying, ‘What are you going to do when adversity strikes?’” Peters said. “24-14 with 10 minutes left in the fourth quarter, we answered. That’s all you can ask for.”