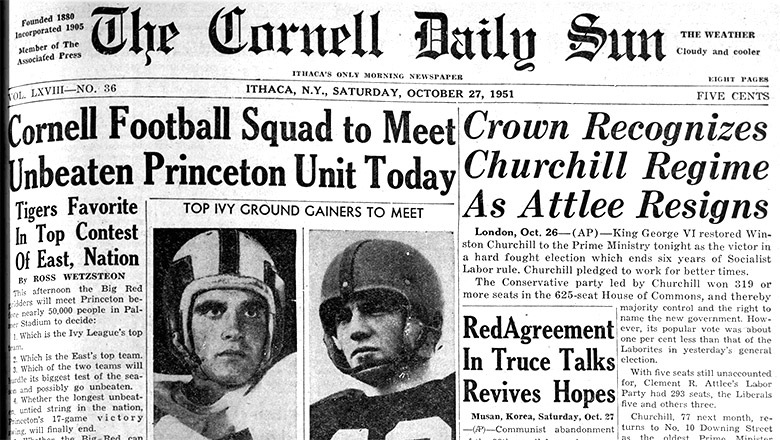 By the brink of November 1951, Coach Lefty James’ Boys were undefeated and ranked highly in the nation’s top ten. They had squeezed the ever-improving Syracuse Orange of Ben Schwarzwalder (21-14). They had clobbered Colgate (41-18), hammered Harvard (42-6) and crashed through Yale’s line of blue (27-0). Against ‘Cuse on opening day at Schoellkopf Field, sprinter Stu Merz ran for touchdowns of 2 yards, 71 yards and 38 yards. His 178 yards afoot exceeded the total of all Orange ball carriers.

Six Big Red gridders—Merz, Bill Scazzero, Hal Seidenberg, Dick Cliggott, Rocco Calvo and Bob Engel—contributed TDs to the slamming of the ‘Gate. Cornell drove 79 yards in seven plays in a scoring march immediately following the kickoff at the Harvard’s yard. Lefty’s reserves took over in the second quarter at New Haven to spark the victory over Yale.

Next, it was on to face Princeton. The Tigers hadn’t been beaten in 17 games. Later in the season, Princeton’s single-wing tailback, Dick Kazmaier, was to appear on the cover of Time Magazine and take home the Heisman Trophy. The Tiger had mauled C.U., 53-15. As he walked off the Palmer Stadium grass that disastrous day, Cornell back Bill Kirk asked an official: “Do you think this will affect our national ranking?” No response has been recorded.

“Casual Kaz,” as he was known by some contemporaries, completed 15 of the 17 passes he launched that afternoon for 236 yards and three touchdowns. He carried 18 times for 124 yards and two TDs. He kept an opening first quarter drive alive when he set out on a right end sweep, found three Red defenders lurking in the Tigers’ den, then cut away, all the way across the field for 22 yards that led to the day’s first score. Later on, he ran a 50-yard reverse that set up one of his touchdown. It was 7-6 after the first quarter and 20-6 at the half. Then things got out of hand. Many of the guys with the orange-and-black arms contributed to the debacle. When the Tiger tally reached 53, Princeton coach Charlie Caldwell sent in the subs.

There have been better days for Cornell against Old Nassau. For instance, the 1962 Gary Wood vs. Pete Gogolak 35-34 gem which former C.U. sports information director Ben Mintz, in perhaps excessive enthusiasm—but it WAS a thriller—called Cornell’s greatest game ever. (Footnote: It was also the weekend of the climax of the Cuban Missile Crisis.)

There was more excitement the next Saturday at Schoellkopf as 21,000 Fall Weekend revelers endured snow. Unfortunately, the end result was Cornell’s first home defeat since a loss to Army in 1948, as Columbia recorded its second straight one-point upset of the Red, 21-20. The game appeared to include six more points for C.U. then what ended up on the scoresheet. Bill Whelan rounded left end for 20 yards for an apparent touchdown. But the play was called back: Backfield in motion.

Michigan, the Big Ten champions every year since 1947 and a Rose Bowl winner, filled Schoellkopf with a record 35,300 crowd (which still stands) on a sunny summer November 10th afternoon. The firmly favored Wolverines scored first and it stood at 7-0 at the half. But the home team was looking good late in the half—and the air in the locker room, we’re told, was electric. “Hey, we can beat these guys,” the Big Red players were telling each other. There was optimism in the stands too.

Late in he third quarter, a 39-yard Jaeckel to Merz TD pass play pushed the Red ahead, 14-7. Seidenberg pounded found the end zone for the final score that made it 20-7.

Superb coaching, Lou Conti’s in-deep-depth scouting report and inspired talent added up to Seidenberg gaining more yards than the entire Wolverine backfield. Four passes were picked off. Michigan gained 13 yards on the ground and 41 overhead in the second half, when the visitors entered Cornell territory just twice as the Big Red’s valiant defense made the Michigan attack fizzle.

Cornell players from that team have said the roughest game of the year was Dartmouth. There was a suggestion during halftime at Hanover that the Red get even by resorting to equally rough ply, but Coach James clearly instructed not to resort to their tactics. In the second quarter, Jaeckel pitched out to Whelan, who threw 30 yards to Kolb to move the ball to the Dartmouth 5-yard line. Seidenberg slammed over for the first of his two TDs. Whelan caught a 25-yard TD pass from Jaeckel. The final: Big Red 21, Big Green 13.

The rivalry game with Penn at Franklin Field on Thanksgiving Saturday drew 40,000 fans. They saw Quaker Joe Varaitis rumble in from the Red 35 on the sixth play of the day after Bob Clappier’s 60-yard punt return. Punter Whelan caught him, probably warding off the touchdown that Varaitis eventually recorded. No more points were scored in the final 57 minutes. Penn 7, Cornell 0. Thus Cornell lost to Penn for the first time since 1947, completing a very up-and-down 6-3 year.

Members of the ’52 Big Red team are expected back for Walt Bruska’s traditional annual Fifties teams reunion this Saturday when Cornell plays host to Princeton on Trustee/Council weekend.