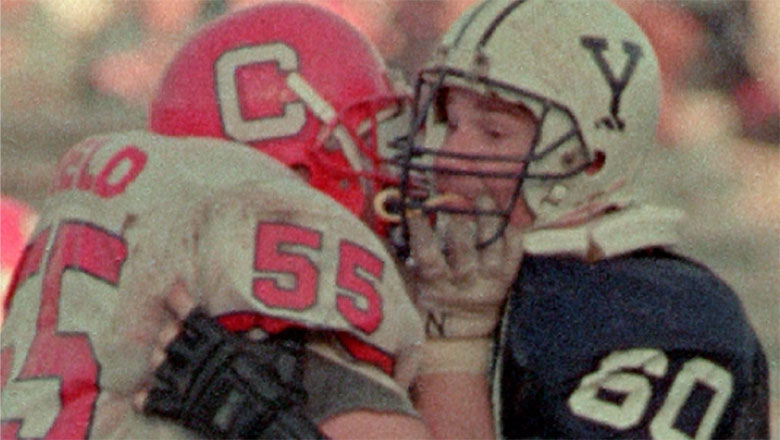 As I passed through security at San Antonio International Airport last fall on my way to the 25th reunion of the 1990 championship team, I heard an all-too-familiar song being piped into the terminal from a nearby Brookstone. Although I wasn’t in the market for wireless speakers at that exact moment, I paused and listened to The Atari’s cover of Don Henley’s The Boys of Summer. You know it well; it’s a song about longing and ache, reminiscence and regret. It’s about getting to a certain station in life, and painfully realizing that those fleeting, triumphant moments of your younger days have slipped away. Wistfully, I sat there in the terminal for a few moments, before realizing that the football gods were now smiling on my trip to Ithaca.

If you’re not familiar with the song, or would like to hear the cover version I heard, I invite you to hydrate yourself with several of your favorite beverages, and have a listen.

So for me, the weekend had started on a high note. Oh, I’m on guard against becoming one of those ‘former football player’ clichés, the ones who wear their letter jackets well into adulthood. The ones who get weepy-eyed watching Friday Night Lights. The ones who can’t acknowledge or accept that their glory days are years or decades in the rear view mirror. But it’s hard to convince yourself that you’re not one of those caricatures when you’re about to fly across the country to raise a toast to your college football accomplishments.

One of my favorite TV spots in recent memory was Troy Aikman’s Lite Beer commercial. In it, a fan approaches Aikman in a convenience store, and gushes about Aikman’s career. He demurs, and claims “I don’t like to dwell in the past”. Then his phone goes off, and it begins chirping “Aikman Touchdown, Unbelievable!” over and over. Busted, Aikman admits, “I dwell in the past”. The bodega owner responds, “I would too.”

I probably would too. In fact, some might think I still do. But I don’t dwell in the past. The past dwells in me.

And it dwells in you, too. Why else would you be reading this? What reason would you have had to open this e-mail, other than that Big Red Football has a sacred place in your heart…that it afforded you a wealth of lifelong friends…that Big Red Football was the crucible in which you forged the man you are now?

Like it or not, you remain invested in what goes on in Schoellkopf.
And so am I. I miss those days. Perhaps you do too. 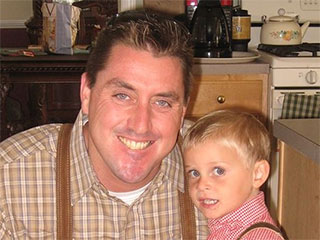 Oh, not the days of doubles. Not the months of near constant fatigue. Not those days of running scout team, and having Mitch Lee or Mike McGrann drill my facemask with a forearm, only to wobble back to the huddle and hear a frothing Pete Noyes bellow “RUN IT AGAIN!”. I remember bitching nearly every day about not having a day off from football. (Side note: …and then I became a parent) Ah, there’s plenty to leave in the past.

But tell me friends, was there anything, save for, say, the birth of your kids, as life affirming and jubilant as the hour in the locker room after a big win?

When we won the ’90 championship, Big Red President Frank H. T. Rhodes stopped by the locker room to offer his congratulations. Perhaps he quickly regretted it; in my youthful and addled state, I thought it was a good idea to hoist him up on my shoulder, and allow him to bask in the pure delight of the moment. I immediately realized my gross error in judgment, and set the 64-year-old British academic down as gently as I could. Ah, when we were young and foolish…

…and victorious. I miss those days of untethered joy.

And so this is the part where I should tell you how important it is that you renew your CFA Membership or strengthen your involvement with the CFA. That you jump in with both feet. Make it rain with your fortune. Mentor a player; steer him in the right direction. Make some introductions. Host an event. Sprinkle some of everything you count as your personal wealth (experience, enthusiasm, wisdom, cash, connections, etc.) upon Big Red Football.

But I won’t. All I’ll ask is that you take a moment to recall that one day, that one minute, when Big Red Football filled your heart with an overflowing abundance. When you embraced your teammates after a big win, and all that needed to be said was captured in sustained howling and goofy grins. When all of your efforts coalesced into something pure and perfect.

And I’ll ask you to pay it forward. That’s my pitch.

The song The Boys of Summer doesn’t end in painful resignation. It’s not only about some old guy moping about faded youth and ruined relationships. Actually, it strikes an optimistic note (I’m gonna get you back / I’m going to show you what I’m made of). It’s a song about realizing what went wrong, and resolving to make it right. It’s a song about acknowledging your failures, and aspiring to regain what you once had. It’s about rising from the ashes.

It’s true that Big Red Football has been suffering through a rough stretch. Let’s rise, men. Together.

Ah, Big Red Football…
Those days are gone forever.
I should just let ‘em go.
But…