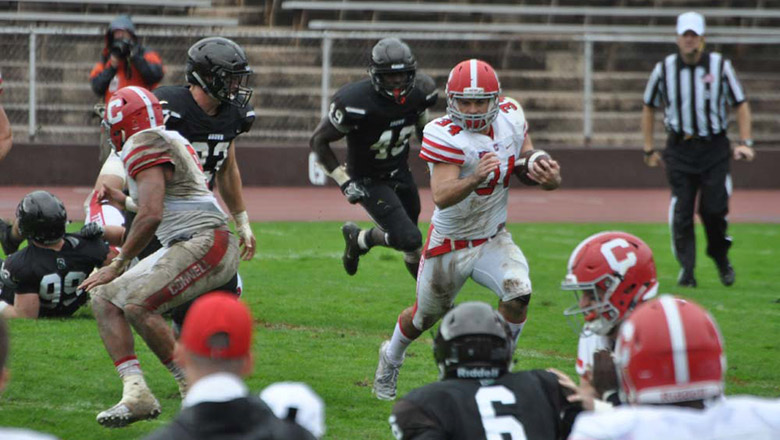 What did the ’15 Bruins have that the ’14 lacked? That would be flying Fritz (The Human Torpedo) Pollard, the 5-8, 150-lb. whirlwind from Lane Tech, Chicago. He made an immediate impact when he checked in. He sped along like a champion hurdler, so close to the grass that would-be tacklers would sail over him. Walter Camp called him “one of the greatest runners I have ever seen.” Pollard was Camp’s first black All-American. His ’15 team outscored all rivals 167-32.

Brown’s Iron Men of 1926 shut out seven opponents, including Harvard, Yale and Dartmouth, and lost to nobody but did tie Coach Andy Kerr’s Colgate 10-10, in what was then their yearly finale. Coach Tuss McLaughrey made exactly zero substitutions vs. Yale, then Dartmouth, back to back. The bottom line: 9-0-1.

Brunonia’s Cinderella team faced eight previously unbeaten teams in 1932 and whupped them all but Colgate, which was undefeated, untied and uninvited to the Rose Bowl. The ‘Gate carved up the Bruins 21-0 on Thanksgiving morning. All-Americans center Thomas Gilbane and Paul Mackesey, who became Brown’s athletic director and alumni director, were pivotal people.

Some called him Scary Gary. Others said Gary Merriwell. They were speaking of the last minute drama QB Gary Wood wrought under the Crescent and elsewhere. In 1963 coach Tom Harp’s Redders curbed the Eli Yale Bulldog 13-10 on Pete Gogolak’s 33-yard field goal with seconds to spare. The Columbia Lion was tamed, 18-17, with 14 seconds left by Wood, afoot. Brown went down 28-25 when Wood found lonely end Bill Ponzer for a five-yard TD with 25 ticks on the board. In ’63, the Bruins and Big Red managed exactly one TD per quarter.

In the first quarter, Woody marched his Redmen 72 yards on 16 plays. With 8:27 played, senior fullback Joe Robinson slammed over from the one with his first-ever TD. Gogolak sidewound the PAT. A minute later, a tie was knotted when Brown runner Bill Lemire dropped the ball at the Cornell 41. QB Jim Dunda picked it up and ran unmolested into the end zone. Brown took the lead in the second quarter when Dunda found Bob Seiple for a 12-yard TD. The PAT was NG. Cornell responded with a 57-yard drive. Rollout dodger Wood skirted the left side for nine yards and six points. Later, Brown end John Parry blocked Gogolak’s 27-yard field goal attempt. At the half: Red 14, Brown 13.

In the third quarter, Robinson pounded his second career TD over, again from really close up. It became 21-13. Brown fullback Pete Thorbahn carried twice for four yards and six points (only), twice from the four in the third quarter (14:09) and fourth (2:51.) Brown both times went for two but did not succeed.

The score was 21-25 and the goal line was 66 yards away. It took 15 plays but Woody moved the Big Red team ever nearer. With 42 seconds left, Robinson bulled to the five. Ponzer found his way to lonely end land (far out). Wood threw him the ball and the unnoticed Ponzer pranced over the last white line. Cornell 28, Brown 25. Fini.

The 1999 Brown team scored freely and frequently. It nailed Yale 25-24 on opening day, and licked Lafayette, 35-28, Princeton, 53-30, Penn, 44-37, Fordham 37-18 and Dartmouth, 35-28. It got to Cornell for 28 but Pete Mangurian’s Big Redders managed 33. That was Brown’s single loss that year. It shared the Ivy title with Yale. Cornell was 7-3, 5-2 in the league. At Providence, D back John Algeo got C.U. an early lead when he fielded a fumble 3:56 into the first quarter and moved the ball 65 yards into the end zone. John McCombs added the PAT. Brown answered with three second quarter TDs when All-Ivy tailback Michael Malan blasted over from one yard out and QB James Perry connected with receivers Chas Gessner and All-Ivy Stephen Campbell for TD passes of 20 and 10 yards, respectively. Early in the third quarter, the Perry-Campbell combo struck again, this time for a 17-yard TD and Brown had a 28-7 lead. Midway through the third quarter, Cornell QB Ricky Rahne and wideout Joe Splendorio got together for a 49-yard TD. That plus McCombs’ 26-yard field goal made it Brown 28, Cornell 17 going into the last quarter. Brown was through scoring for the day. But Cornell was not. Rahne threw for 443 yards that afternoon, with 333 yards in the second half. He completed 11 of 16 passes in the fourth quarter for 201 yards. In the closing minutes Ryan Visniski got free for five yards and six points. A try for a two-pointer failed but McCombs’ 25-yard field goat was good. Brown 28, Cornell 26. Dan Weyandt caught a Perry aerial and returned it 23 yards to the Cornell 41. The Redmen made a quick march to the seven yard line. Brian Ulbright took it over from there with 1:10 to play. McCombs’ PAT made it 33-28. Algeo appropriated a Perry pass at the Cornell 26 with 48 seconds left. Final: 33-28

Tim Pendergast’s 2002 Red played three overtime games, beating Towson 34-31 in two OT’s and losing to Princeton, 32-25. Ithaca rain fell all afternoon and from halfway through the first quarter to the very last minute C.U. was seven points under Brown. Rain? Cornell fumbled eight times and Brown four. Brown’s 7 capped a 12-play, 78-yard drive after an interception at the Brown 22. Late in the day, it was Cornell’s ball at its 34. It was to march on. Marcus Blanks carried seven times for 33 tough yards as QB Mick Razzano raced the ticking clock for 11 plays. With 52 ticks left Blanks dashed the 15 yards to the TD that meant OT. The first OT went scoreless. But Trevor MacMeekin kicked a 42-yard field goal in the second. The Red D held Brown to one yard total offense. Backerup Nate Spitler swiped a desperation pass and the day ended C.U. 10, Brown 7.

Down 24-14 at halftime, Jim Knowles’ 2007 Red D held Brown to 44 yards on 19 carries in the second half at Schoellkopf on October 20. Buddy Farnham caught an 18-yard TD pass from Matt Dougherty in the third quarter so it was 31-14 until Tommy Bleymaier carried eight yards for a TD with a minute left of the fourth quarter as QB Nathan Ford went Bruin hunting. He unloaded 54 passes on the day, completing 34 to 10 different receivers. The clock was running down as he threw 14 yards to Horatio Blackman. Pete Zell’s 24-yard field goal with just under three minutes left sent the struggle into overtime. Randy Barbour, who had run for the two first half TDs, carried five yards and Cornell was a 38-31 winner. Barbour carried 32 times for 159 yards which made him Ivy League Offensive Player of the week.

Rain fell equally on Cornell and Brown at Providence last fall. Neither team scored until just before the half when Alex Jette returned a punt 79 yards and suddenly it was Brown 7, Cornell zip. Early in the third quarter, he caught an 18-yard pass from QB Tom Linta and suddenly it was Brown 14, Cornell zip. C.U. quickly came back with a 10 play, 85 yard drive topped off with a QB Dalton Banks TD toss to Matt Sullivan. About two minutes later, Brown fumbled in its own end zone. Banks passed to Ben Rogers for six more and suddenly it was 14-14. Both teams missed field goal attempts in the last five minutes of regulation. Banks passed to Marshall Deutz for the first overtime points, which the Bruins matched, Linto to Jette from up close. Brown’s Johnny Pena’s one-yard TD plunge ended the second overtime at Brown 28, Cornell 21.