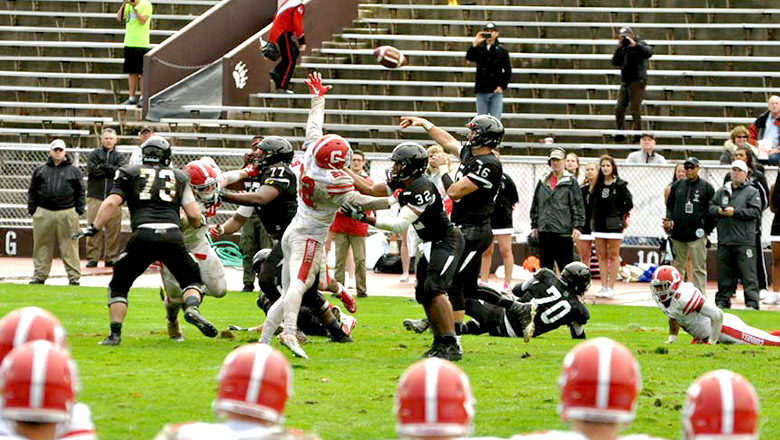 The Cornell defense continues to shine when challenged, and this was evident again on Saturday. The Big Red defensive unit defended six drives that started inside Cornell territory and yielded just seven points off those drives. The defense held Brown to a 1-of-5 day scoring in the Red Zone. Four times the Cornell defense stopped Brown on fourth down. Furthermore, Brown did not have a scoring drive of longer than 49 yards.

Sophomore Reis Seggebruch recorded a career-high 15 tackles with 2.5 for a loss and a sack. In addition to his team-leading fifth interception, junior safety Nick Gesauldi made 14 tackles. Jackson Weber added 10 tackles, including one for a loss, and Kurt Frimel made six stops with a TFL, a forced fumble and a fumble recovery. The Cornell defense surrendered just 354 yards on the day, forced a pair of turnovers and had seven tackles for loss.

“I just thought it was going to be a field position game with [senior punter Chris] Fraser able to flip the field for us until we could get things going our way we needed offensively,” Head Coach David Archer told the Cornell Sun. “Just shows you our defense really rose to the occasion in our own territory and rose to the occasion to keep points off the board.

The Big Red had two takeaways, adding to its season total of 11 interceptions and four fumble recoveries.

“They really take great pride in taking the football away, which is great to see,” Archer said to the Cornell Sun. “They play a tenacious brand of football.”