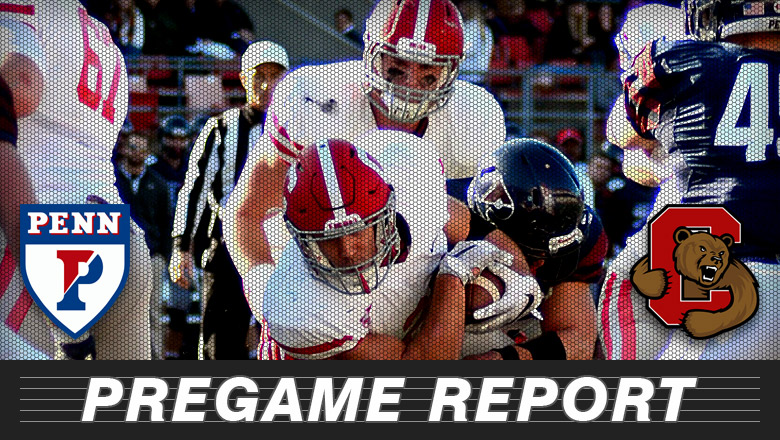 Fresh from winning the fourth consecutive Empire State Bowl (it’s really a nice crystal bowl), the Big Red has much to play for when it entertains Penn at Noon on Saturday at Schoellkopf Field and a Fox Sports TV audience.

With 122 previous meetings, the Cornell-Penn series ranks fifth in most games played in the FCS. The Cornell-Dartmouth series and the Big Red-Penn series are the second-longest uninterrupted active series, as the teams have met every season since 1919, a span of 97 years. They trail only Lafayette-Lehigh, which has been played every year since 1897.

In the last 30 years, Cornell and Penn have battled for the Ivy championship three times on the final game of the season. In 1986, Maxie Baughn’s greatest defensive team ever lost to the Quakers 31-21 before 22,000 screaming fans at Schoellkopf.

1988 saw the two teams meet again in Ithaca before 18,000, with the Ancient Eight title on the line, and the Big Red prevailed 19-6. Five Cornell players earned first-team All-Ivy honors, including Hall of Famers Scott Malaga (RB) and Mitch Lee (LB).

The Jim Hofher era began in 1990, and again it was Penn fighting the Red for the championship at Schoellkopf in the final game. The score? Cornell 21, Penn 15. With Hall of Fame assistant Pete Noyes moving over from defense to coach the offensive line, Cornell had three trenchmen—Jay Bloedorn, Greg Finnegan and Chris Field—named to the Ivy League first team, leading the Big Red’s 14 overall selections. All-Ivy tailback John McNiff, another Hall of Famer, rushed for 998 yards that season, and he’s still trying to find that final two yards. That was the same year that McNiff’s running mate, Hall of Famer Scott Oliaro, rushed a school-record 288 yards in a victory at Yale.

Many followers of this tremendous rivalry remember all the games that were played at Franklin Field on Thanksgiving annually from 1897-1938, except for 1918.

Beating Penn will be the biggest challenge Cornell has had this season. The Quakers are tied for first place (5-1) in the Ivy League with Princeton and Harvard, and have won six of their last seven outings.

Senior Alek Torgersen, first-team All-Ivy in 2015, is an excellent quarterback who has thrown for 1,947 yards and 16 touchdowns, while scoring six himself. The offense is balanced with the league’s leading rusher, Tre Solomon, lining up with Torgersen. Solomon has 734 yards and seven TDs.

The visitors’ leading receiver is Justin Watson, who has 78 receptions for 1,009 yards and eight scores, including the game-winning three-yard reception with 0:15 left in the victory over Harvard.

Cornell Head Coach David Archer analyzed the opposition by saying, “Penn is an outstanding football team with a lot of firepower. Torgersen is the best quarterback in the Ivy League, and Solomon’s stats speak for themselves; he is also No. 1. And Watson is an NFL quality receiver. He is so good; he should be playing at another level.”

Cornell scored 42 points last week at Columbia. The last time the Big Red had tallied that many points was in the 2013 season finale, a 42-41 squeaker over, you guessed it, Penn.

The Big Red will say good-bye to 26 seniors, but the cupboard certainly isn’t bare. The top passer, Dalton Banks, and two top rushers, Chris Walker and J.D. PicKell, will be back next season to give the offense much balance. The defense will be solid with the return of Nos. 1 & 2 tacklers, junior safety Nick Gesualdi and sophomore ILB Reis Seggebruch. In addition, Gesualdi, with six interceptions in 2016, topped a defense that had 14 pickoffs.

The President’s Cup is up for grabs on Saturday. Somebody has to take it home, so it might as well stay right here rather than make that trip back to Philadelphia.