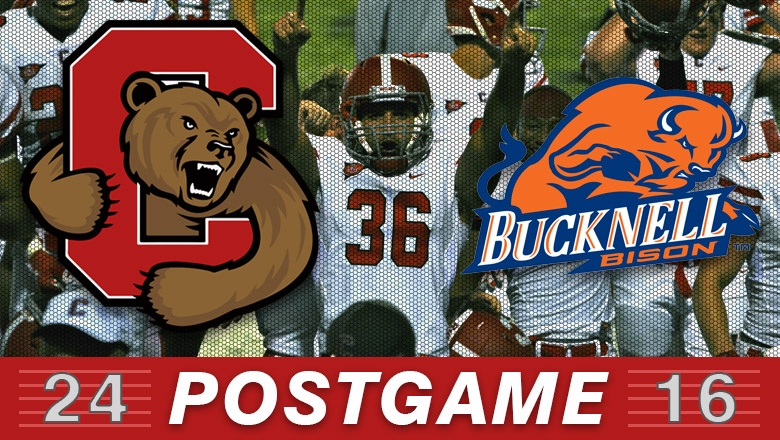 LEWISBURG, PA. – “Cornell Victorious” never sounded better than the version Big Red fans heard here on Saturday night. With a 24-16 come-from-behind victory over Bucknell, the Red will take a 1-0 record into the Homecoming Game vs. Yale Saturday afternoon (Sept. 24) with a 3 p.m. kickoff.

The game wasn’t spotless to say the least, but the grit and determination demonstrated by the Big Red was something that has been missing in recent years.

Playing against an opponent that was in its third game isn’t an easy chore, and the Big Red found itself down 10-0 early in the second quarter. At this point, Cornell started to roll. An 11-play, 46-yard drive culminated with a career-high 41-yard field goal by sophomore place-kicker Zack Mays 6:24 into the period.

The defense took over and forced Bucknell to punt after just three downs, and the Big Red was backed up on its own 16. No problem. It marched 84 yards to tie the score at 10-all 28 seconds before halftime. Sophomore running back Chris Walker, who had a career-high 133 yards on 16 carries, picked up 43 yards on the drive, and classmate quarterback Dalton Banks threw for 18 yards before capping the scoring with a 10-yard scamper on third-and-goal. 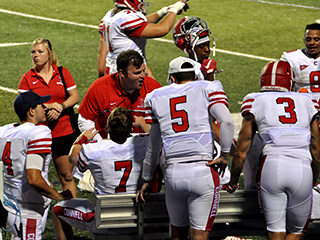 “We had a lot of self-inflicted wounds in the first half,” said Coach David Archer in alluding to the team’s penalties (it was whistled 11 times for 85 yards). “To come back and tie it at halftime was really good.”

Bucknell came out of the locker room and used a seven-play, 75-yard series to go back on top, 16-10, as the extra point was blocked by junior tackle Gene DeMarco just 4 minutes into the third quarter.

Banks, in his first collegiate varsity start, continued to move the offense, and Cornell rolled 73 yards in 11 plays to go back on top, 17-16, midway through the third quarter. Banks completed 3-of-4 passes for 36 yards, and scored himself on a 1-yard jaunt. 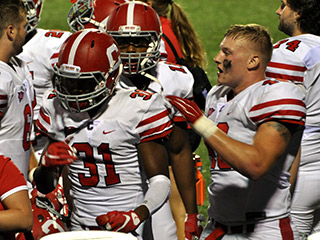 After sophomore cornerback DJ Woullard’s second interception of the day, the Red marched 73 yards in nine plays to score on a 22-yard reception by senior tight end Matt Sullivan for the final margin with 16 seconds left in the third period.

Bucknell wasn’t done, and had a few chances to tie the score, but an aggressive and alert defense stemmed the tide with a forced fumble by sophomore linebacker Malcolm Chaka on its final drive, and then Cornell was able to run the clock out.