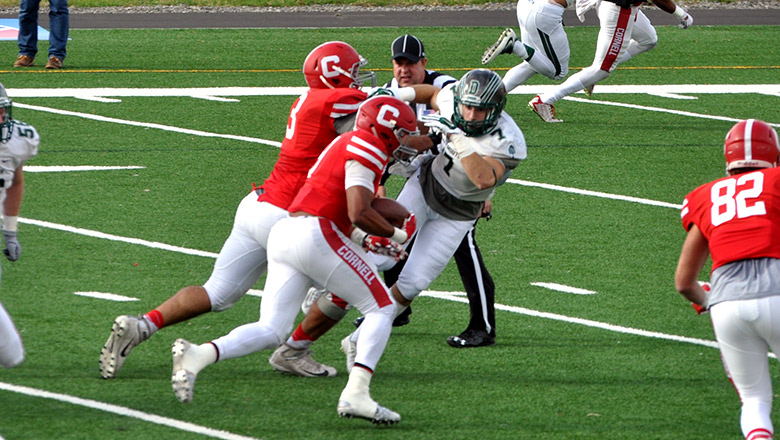 Coach David Archer promised leading up to the Dartmouth game that his Big Red squad would come out “re-focused.” Archer said he noticed the change during the week of practice, and indeed Cornell showed a lot of energy to start Saturday’s game.

The offense drove the ball inside the Dartmouth 10-yard line on each of its first two drives, going 71 yards on 14 plays the first series and 51 yards on 16 plays on the second one. However, Cornell was unable to find the end zone on both drives and had to settle for field goals by freshman Nickolas Null.

Archer devised a game plan using a spread offense that attached the Dartmouth defense with short passes. During the 30 plays in the two scoring drives, only six were on the ground. Eleven of the 12 completions by quarterback Dalton Banks went for less than 10 yards.

Still, the fact that the offense could not convert either of the first two scoring drives into touchdowns came back to hurt Cornell in the end.

“We had two awesome drives right out the gate, but there are a few little things we wish we could have back,” sophomore quarterback Dalton Banks said to the Cornell Sun. “It was tough to see that happen twice but we were still getting points on the board. We have to keep driving the ball and moving the ball, and the touchdowns will come.”

The ground game played a major role in the final outcome. Cornell was able to gain only 50 yards rushing in 21 attempts. Meanwhile, Dartmouth’s rushing attack got stronger as the game moved along. The Big Green rushed for 179 yards in 42 carries and was able to possess the ball for the final 5:56 by keeping the ball on the ground for 11 of 12 plays, including three runs that resulted in first downs to move the chains. The Big Red never got chance to attempt the game-winning drive it had hoped for after it was forced to punt the ball away following Dartmouth’s go-ahead touchdown.

While Cornell didn’t achieve its goal of bouncing back with a victory, Coach Archer still saw his team display the kind of effort that can lead to a strong end to the 2016 campaign.

“I’m really proud of the kids. I’m so disappointed today, but I know these guys,” Archer told the Sun. “They’re going to come out. We’re going to keep reminding them of that because they’re good players, unbelievable kids and we’re going to keep going.”