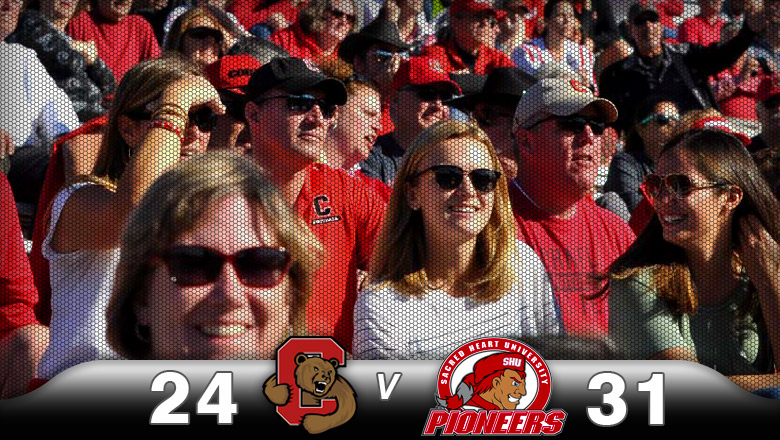 In football, usually the team that wins the turnover/takeaways battle is the victor. Not so last Saturday afternoon at Schoellkopf Field on a beautiful day for watching football.

The Big Red (3-2) lost to Sacred Heart (5-1), 31-24, but won the battle. Cornell intercepted four passes and recovered one fumble, while the Pioneers recorded one pass interception and a recovered fumble. In my high school math class, that’s 5-2.

“It was really an emotional game, “ said Coach David Archer. “The guys left it all out on the field. There were certainly a lot of good stats to point to. I’m just disappointed with the win-loss column.”

A Sacred Heart turnover set up the first score of the game. Big Red junior linebacker Daniel Crochet popped a Crusader, and the fumble was recovered by sophomore linebacker Malcolm Chaka at the visitors’ 14. First down, Cornell. And in just one play, it was touchdown Big Red; as junior Jack Gellatly weaved his way into the end zone for a 7-0 lead with 6:39 remaining in the first quarter.

Cornell then had trouble handling a couple of fine Sacred Heart running backs, as the visitors scored on runs of 22 and 13 yards to make it 14-7. The first score was set up by a 76-yard kickoff return.

“When you play aggressive defense to force takeaways,” explained Coach Archer, “you run the risk of giving up a big play.” Every Crusader scoring drive included a play longer than 39 yards. In every other drive, only one resulted in a field goal, and none came with a play of over 15 yards.

In the second quarter, freshman Nickolas Null booted a 34-yard field goal for the first of his collegiate career. Sacred Heart led 24-10 at halftime even though the Red had the ball nearly 19 minutes of the 30-minute half. The FG was set up by junior safety Nick Gesualdi’s first of two interceptions in the game. He now has nine for his career.

Midway through the third quarter, the visitors tacked on another seven points via a 39-yard pass play to increase their lead to 31-10.

It was comeback time.

Three straight Sacred Heart pass attempts were intercepted to give the Big Red excellent field position. Cornell used it to its advantage by scoring on two of the three. Sophomore running back J.D. PicKell scored from two yards out, as the Red went eight yards on four plays, and sophomore quarterback Dalton Banks tallied a 1-yard run on the end of a 13 play, 51-yard drive with 8:54 left in the game to cut the lead to 31-24.

The home team forced a pair of punts, but ended one drive with a punt and the final one with a desperation pass that was intercepted with three seconds left on the clock. The defense had allowed just 76 yards on the visitors’ final five possessions (19 plays), and turned them over three times, but dropped the 31-24 decision. Last year’s game? Sacred Heart 31, Cornell 6.

No excuses needed, but the Red did play the game without top rusher, sophomore Chris Walker, and No. 1 receiver, senior Ben Rogers.

The ground game was impressive, as PicKell had 95 yards on 22 carries, Banks recorded 87 markers on 15 carries, and Gellatly averaged 6.3 yards per carry for 75 yards. Cornell had 257 yards on the ground, and Sacred Heart chalked up 265 yards, led by Nate Chavious with 160 yards on 24 attempts. Ose Imeokparia was impressive with 85 yards on just nine carries for a 9.4 average.

The defense has intercepted 10 passes, more than doubling last year’s total in half as many games. Coach Archer gave his secondary credit for its ability to create takeaways in big spots all season long.

“They just do a great job. They have great ball skills; they track the quarterback… They’re just doing a really nice job,” he said. “Coach [Jared] Backus and the defensive secondary are doing a great job taking the ball away. They got us back in the game on Saturday.”

Next week is that long drive to Providence to play a Brown squad that is 1-4 overall, 0-2 in the Ivy League. Last Saturday, the Bears lost to Princeton, 31-7, playing without their quarterback. It should be an exciting game, as Brown used a Wildcat offense with two wide receivers taking the snap deep behind the center.