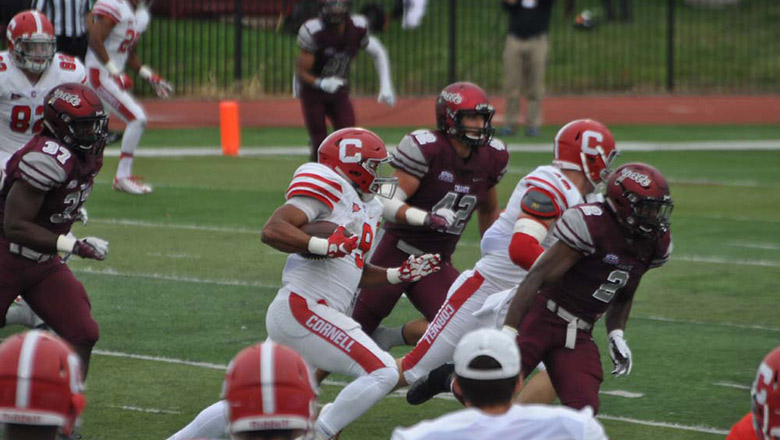 A certain sign that autumn is in the air of the Vale of Onondaga, the busy humming of a bustling town and the Chenango Valley, when store windows of Salina Street, State Street and Hamilton begin to display photos of the gridiron gladiators of Syracuse, Cornell and Colgate — the Big Three of Central New York. They have been at it, off and on, for over a century. Cornell first played Syracuse — a 68-0 victory that made history in 1891 — and Colgate in 1896 — a 6-0 struggle. The ‘Cuse and the ‘Gate first got it on in 1891 (Colgate 22, Syracuse 16.)

Syracuse never scored on the Big Red in nine games from 1891 to 1900 but when the rivalry resumed in ’33 it handled some lesser Gil Dobie teams three years running to ’35, Dobie’s finale. Carl (the Gray Fox) Snavely moved in the next year
to build better single wing mousetraps. By 1938, he had created a line that included three first-team All-Americans: all-around (and end-around) end Brud Holland, National Hall of Famer and future ambassador to Sweden, tackle Bill McKeever and guard Sid Roth. The team went 5-l-l (there was a scoreless tie with Penn) but all three were gone the next year. It’s not all bad news. The Class of ’41 had become sophomores and that bunch was loaded. The ’38 team lost only to Syracuse, featuring world class sprinter (and future broadcaster of Giant and Jet games), Marty Glickman, tailback Wilmeth Sidat-Singh (he was reportedly Hindu but was an Afro-American lad adopted by an Indian family, it was learned much later), crafty end Phil Allen, and end Harold (Babe) Ruth.

Sidat-Singh was considered to be a forward passer to be mentioned in the same breath as Columbia’s (Bear to be) Sid Luckman. .Kenny Brown’s 94-yard kick return put C.U. up 17-6 at the home of the Orange but two passes from Sidat-Singh got S.U. back in the game, 17-12, with three minutes left. Allen, pursuing Red ball carrier Vinnie Eichler, reportedly called out “Here Vinnie” and Vinnie tossed him the ball. Sidat-Singh’s pass to Allen in the end zone added up to a 19-17 upset.

In the Forties, Cornell pretty much dominated the ‘Cuse — until the arrival of coach Floyd (Ben) Schwartzwaldwer. And, it was whispered around Ithaca, when Cornell coach Lefty James learned that Jim Brown would be attending S.U., the Syracuse series would end. Brown ran for six points, but that was all, in the 1954 game. Cornell won, 14-6) en route to a second consecutive unofficial Ivy title, capping great years from QB Bill DeGraaf, HBs Richard Jackson and Dick Meade, FB/LB Guy Bedrossian, tackles Len Oniskey and Poe Fratt, guards Stan Tsapis and Jim Van Buren, and ends Bruce Brenner, Stan Intihar and John Morris. No platooning in that era.

The last Cornell-Syracuse game, at Archbold Stadium, ended 55-0 for the Orangemen. It has been said that some of Ben’s boys jammed Cornell signals that day. For instance interrupting signals with shouts like (NOW!) or (GO!).

In 1897, a Colgate alumnus ran out onto the field to tackle a Syracuse runner who appeared to prevent what have been a go-ahead TD. The final was 6-6.

In ’32, ‘Gate shut ‘Cuse out, 16-0 and was proclaimed national champion for the second time.

In ’61, the national champion Syracuse slammed the ‘Gate 71-0.In 1938, the ‘Cuse toppled the Terps of Maryland 53-0 but lost to Michigan State, Penn State and Duke in a 5-3 year. Many considered the 7-0 conquest of Colgate to be the season high spot. It hadn’t been done since 1924. . . the first of 13 unlucky years. Unable to score on the Raiders in the first half, Saltine Warrior Richard Banger returned a punt to the 14 on the last play of the third quarter. Then Allen went untouched on an end around over the last stripe. His dash was the sole score of the day. It ended the Colgate hoodoo over S.U. and meant that the Orangemen had for the first time beaten Columbia, Cornell and Colgate in the same year. In ’41 coach Ossie Solem’s Warriors dumped Wisconsin and Penn State before the annual ‘Gate date at Archbold. It was the year Solem had center Ken Beehner turn his back to the line of scrimmage to snap the ball in reverse, facing nowhen the rest of the team was facing south. That game, played just a few days before December 7, 1941, ended dramatically when shortish Bunky Morris, one pf the last drop-kickers, ran a punt back into the end zone in the closing ticks. So it ended 19-19. It was the first college game your correspondent, then aged 10, was to witness. He was impressed.

Cornell won 13 of its first 14 games with Colgate (there was a scoreless tie with Pop Warner’s 8-1-2 team of 1906) and was unbeaten in nine games with the Red Raiders of 1920-1941, which included Dobie’s finest hours with National Hall of Famers like George Pfann, Eddie Kaw and Frank Sundstrom. The Big Red downed coach Andy Kerr’s Raiders eight out of nine times between 1945 and ’53.The ‘Gate prevailed for the decade beginning in 1993. It was shut down last year after seven winning years vs. the Redmen of Ithaca. Colgate nearly upset the Big Red applecart in its National Championship season of 1939.but went down, 14-12 at Schoellkopf. The Orange dropped football for 1943 and its dashing, shifty little running back Bill Maceyko was transferred to Cornell by the armed forces of the nation. He went on to North Carolina when Snavely took the job there. The Orange people resumed the game in ’44. Archbold being available, Cornell and Colgate met there in ’43. Colgate won, 20-7. Coach David Archer’s guys trailed, 28-5, at one point in Colgate’s Homecoming last year. They had yielded five scores on Colgate’s first six drives. In the second half, they quashed Colgate twice on downs and forced three punts. Cornell got its offense in gear in the third quarter. As the final frame neared, Cornell had narrowed the score to 38-33. To climax fourth quarter struggles, Cornell got the ball with a minute and a half to go. Sophomore quarterback Dalton Banks moved the Red ahead on his arm and afoot for seven yards to the 19 yard line. When the clock reached 28 seconds, Banks found senior wide receiver Collin Shaw deep in the end zone and hit him with the decisive TD. The final: 39-38. Cornell was now 3-0 on the young season. The 25th-ranked Colgate was 1-3. It was Cornell’s first win over a ranked team on the road since the 1950 Hurricane upset of mighty sixth-ranked Penn, 13-6 Banks threw 25 for 45 yards for 454 yards and four TDs passing to ten different receivers.