About the CFA Awards 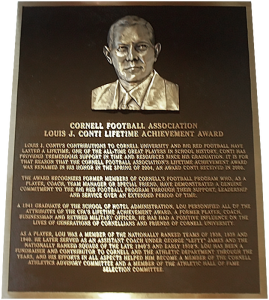 Louis J. Conti’s contributions to Cornell University and Big Red Football have lasted a lifetime. One of the all-time great players in school history, Conti has provided tremendous support in time and resources since his graduation. It is for that reason that the CFA’s Lifetime Achievement Award was renamed in his honor in the Spring of 2004, an award Conti received in 2000.

The award recognizes former members of Cornell’s football program who, as a player, coach, team manager or special friend, have demonstrated a genuine commitment to the Big Red Football Program through their support, leadership and service over an extended period of time.

A 1941 graduate of the School of Hotel Administration, Lou personified all of the attributes of the CFA’s Lifetime Achievement Award. A former player, coach, businessman and retired military officer, he had a positive influence on the lives of generations of Cornellians and friends of Cornell University. 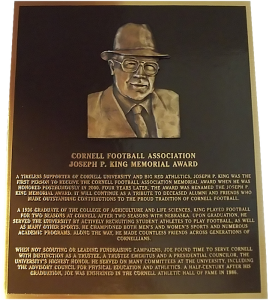 A tireless support of Cornell University and Big Red Athletics, Joseph P. King was the first person to receive the CFA Memorial Award when he was honored posthumously in 2000. Four years later, the award was renamed the Joseph P. King Memorial Award. It will continue as a tribute to deceased alumni and friends who made outstanding contributions to the proud tradition of Cornell Football.

A 1936 graduate of the College of Agriculture and Life Sciences, King played football for two season at Cornell, after two seasons at Nebraska. Upon graduation, he served the University by actively recruiting student athletes to play football, as well as many other sports. He championed both men’s and women’s sports and numerous academic programs. Along the way, he made countless friends across generations of Cornellians.

When not scouting or leading fundraising campaigns, Joe found time to serve Cornell with distinction as a Trustee, a Trustee Emeritus and a Presidential Counselor, the University’s highest honor. He served on many committees at the University, including the Advisory council for Physical Education and Athletics. A half-century after his graduation, Joe was enshrined in the Cornell Athletic Hall of Fame in 1986. 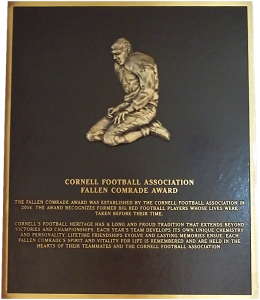 The Fallen Comrade Award was established by the CFA in 2004. The award recognizes former Big Red Football Payers whose lives were taken before their time.

Cornell’s football heritage has a long and proud tradition that extends beyond victories and championships. Each year’s team develops its own unique chemistry and personality. Lifetime friendships evolve and lasting memories ensue. Each fallen comrade’s spirit and vitality for life are remembered and held in the hearts of their teammates and the CFA.