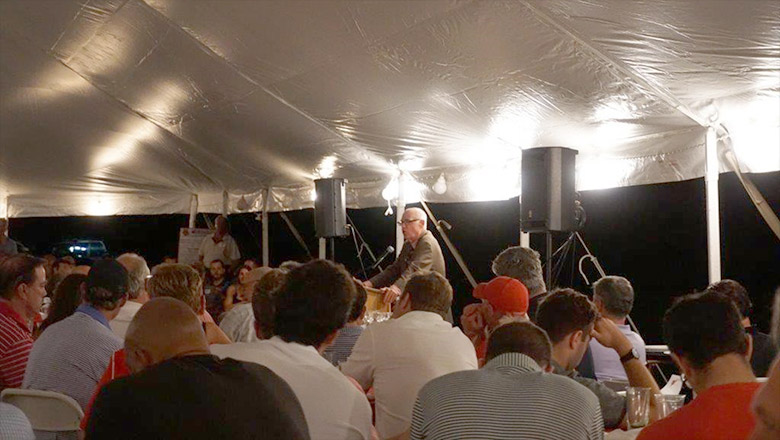 For lo, these many moons, the CFA has tapered on to an imminent season of football with a mid-summer golf gathering, gracious dining and an auction that may take someone to Super Sunday and raise money for the organization to assist the football program. During those years, a notable of the C.U. football family has received CFA’s Lou Conti ’41 Lifetime Achievement Award, usually on weekend of the last home game of the year. This year, auctioneer, William Buckley (Buck) Briggs Jr. ’76 was honored with the Conti Award at the Ben Mintz/CFA Golf Outing July 29-30 before a large, attentive, appreciative audience.

Conti, an outstanding guard on the 1939 Big Red squad—widely considered the nation’s number one team, coached Lefty James’ great teams of the Forties and Fifties and flew in World War II and Korea combat. 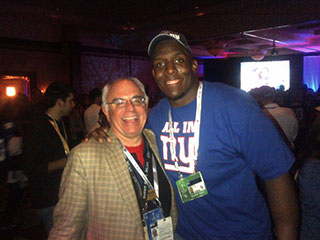 Buck, National Football League vice president for arbitration and litigation, adjunct professor of law at Cornell and lecturer at Penn law and elsewhere is color analyst for Cornell football games with play-by-play partner Barry Leonard. As CFA golf outing auctioneer, he partners with Ed Marinaro. Their wit and wisdom makes for lively evenings.

In honoring Buck at the CFA event, Barry recalled that the first time they were paired on the air he “wondered how it would work,” but that they blended almost seamlessly for 14 years . . . Buck is an encyclopedia of Cornell football lore and U.S. history who presented a different dimension with recall of events from years ago—and all with great flair. 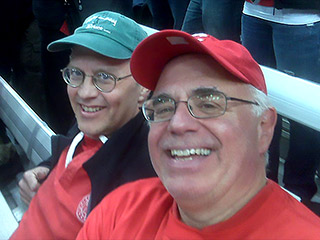 The color man was sidelined last year by a nasty rare blood plasma disease he continues to battle with grueling treatment and astounding courage. Buck, whose promising future as a Big Red baseball player was curtailed by a severe knee injury, spoke of his illness before auctioneering at the ’16 CFA golf outing. 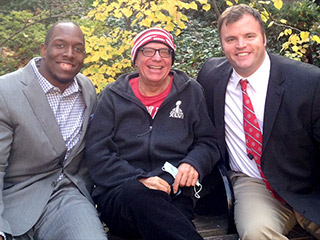 Buck skipped his 36th chemo session for the awards ceremony. He encouraged those present not to neglect medical things that may seem “minor,” to pay heed. Take charge of your health he urged, and quoted Victorian poet William Ernest Henley’s “Invictus:”

“I am the master of my fate. I am the captain of my soul” 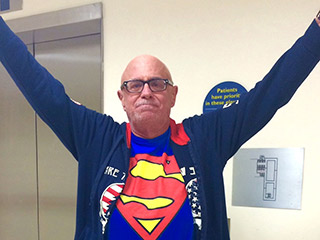 Buck’s brother Mark backed his firmly positive attitude; “He is going to beat this thing into submission,” he said. Buck has been a Big Red rooter since pre-Cornell days down the road in Endicott. That’s Archer’s hometown, too. (By the way, he was to become Buck’s brother in Phi Kappa Psi.)

Buck now dwells far above the East River’s waters in the heart of Manhattan. There’s a second home far above the waves of blue. There he preserves the replication of Collegetown’s Royal Palm after obtaining quite a bit of its furniture. He was a founding father of CFA, appointed by Mark Allen to its first board and definitely active ever after.

As for his best Cornell day, Buck cites the day after graduation ’76 when “Cornellians piled into assorted vehicles to Providence and saw Cornell win an NCAA lacrosse title.” He says that day is in place awaiting the day Cornell wins its first sole Ivy League football championship.”