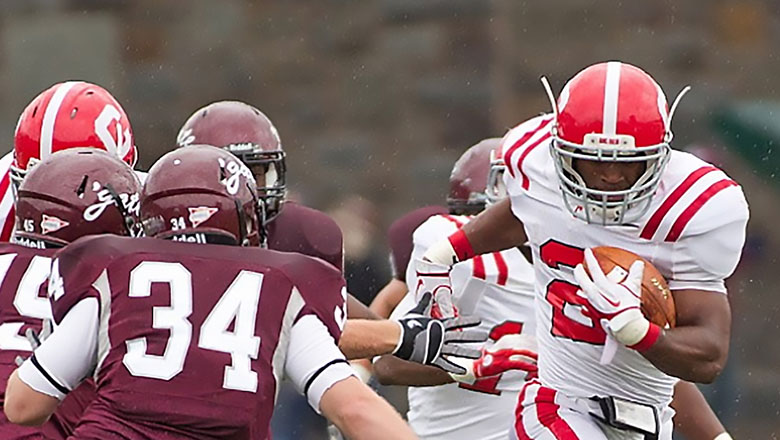 Cornell will be hosting a rare Friday night football game against Colgate on October 2 at 7pm. This will be the first ever Friday night game at Schoellkopf Field and the first for Cornell since October 26, 2007 at Princeton. The Big Red is still looking for their first win of the season as they have gotten off to an 0-2 start thus far while Colgate has also struggled with a 1-3 record entering this game.

While Colgate enters this week with just one win in four games, they did win their most recent game by beating up on Holy Cross last Saturday winning 31-14. Colgate shut out Holy Cross in the second half and scored 21 points in the fourth quarter. The Raiders ran for 266 yards against Holy Cross led by running back James Holland who had 141 yards and 5.9 yards per carry. However, Holland is only second in rushing on Colgate this season. John Wilkins has received the majority of the carries although Holland has been more efficient on his runs. Quarterback Jake Melville is also a threat on the ground averaging 50 rushing yards a game. Cornell’s defensive game plan will certainly include trying to slow down this trio in the running game.

Another priority for Coach Archer’s team will be trying to close out games, especially if Cornell has the lead in the fourth quarter. This has been a problem thus far as the Big Red has had leads in both fourth quarters that have been lost late in the game. This weakness could be trouble facing a team that is coming off a win where they came back with a 21-0 run in the fourth quarter.

Similar to Colgate, Cornell also has a dominant running game with lead back Luke Hagy, who will be attempting a sixth straight 100-yard rushing game, something that has not been accomplished since 1997 by Chad Levitt. Quarterback play this season has been efficient thus far as well. Robert Somborn has thrown four touchdowns and two interceptions, while completing 60% of his passes for 390 yards in two games. However, Cornell is at its best when Hagy is the focal point of the offense and Somborn acts as more of a game manager. The Big Red defense has also been stellar this season as it ranks second in the Ivy League conference.

Cornell and Colgate have faced each other 97 times dating back to 1896. The series has been close with Cornell holding a slight advantage going 48-45-3 in those games although Colgate has won 29 of the last 36 contests.