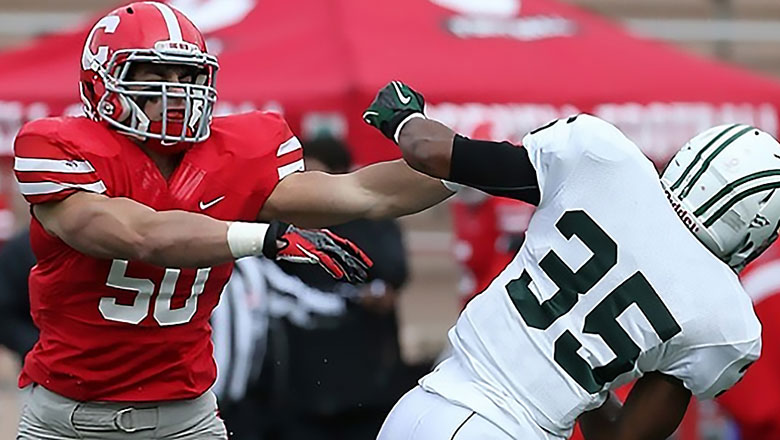 Hanover, N.H.–The Cornell football team lost to rival Dartmouth Friday night despite a strong effort from the defense that has struggled throughout most of the season. The loss dropped the Big Red to 0-8 on the season and 0-5 in the Ivy League while the Big Green improved to 7-1 overall and 4-1 in the conference.

Dartmouth came into the game as one of the most potent offenses in the Ivy League but was held to just 419 total yards and 21 points despite being on the field for 83 plays. Cornell’s defense came into this game surrendering 40.5 points per game over their last four contests but stepped up to the challenge this week. Dartmouth quarterback Dalyn Williams, who is considered to be a top Ivy League quarterback, was held to just 203 yards and one touchdown through the air. Dartmouth did find success on the ground rushing for 211 yards coming from six different players with a rushing attempt. Williams did add another touchdown via the run. Outside linebacker JJ Fives led the charge for Cornell with two sacks and nine tackles on the day. Cornell also forced two fumbles, both of which were recovered by the defense.

As good as the Big Red defense was on Friday, the offense struggled. Cornell posted just 194 total yards on offense. Quarterback Robert Somborn completed just nine of his 25 pass attempts for 83 yards and added an interception. Even running back Luke Hagy was kept relatively in check by the Big Green as he ran for 65 yards on 17 attempts. He was also the leading receiver for Cornell with three catches for 34 yards. No other receiver had more than 15 yards on the day. Hagy became the first every Ivy League player to have 2,000 rushing yards and 1,500 receiving yards in a career. He is now sixth on the all-time Cornell list for rushing yards and ninth on the receiving yards list. This offense will surely miss his contributions next season after he finishes his senior year. Needless to say, this was the most anemic the offense has looked all season. Coach Archer will need to look over the tape and see what caused the passing attack to struggle so much this week. Cornell did put up the first points of the game with a 30-yard field goal and held that lead for 6:55, which is the longest Dartmouth has trailed a team all season. Afterwards though, it was 21 unanswered points for the Big Green to down the Big Red.

With two games left in the season, and still looking for their first win, Cornell will host Columbia in its last home game of the season on Saturday, November 14 at 12:30 pm this week.