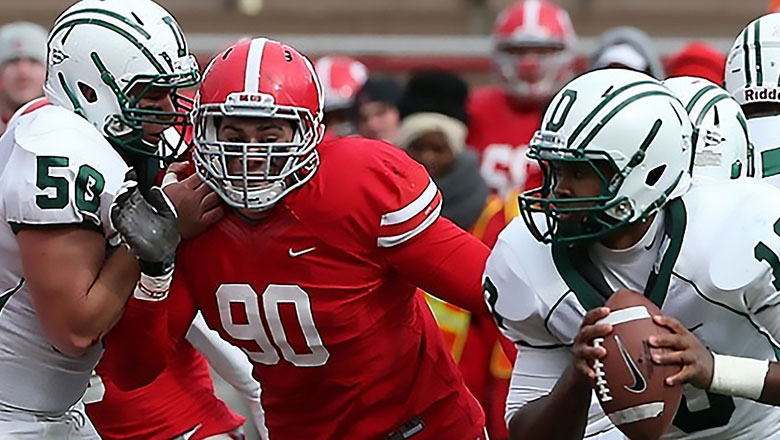 The Cornell football team will visit fellow Ivy League member Dartmouth this Friday night on November 6 at 8 pm at Memorial Field in Hanover, New Hampshire. The Big Red is still looking for their first win of the season as they have gotten off to an 0-7 start, including 0-4 in the Ivy League, which has them currently in last place. Meanwhile, Dartmouth has been dominant with a 6-1 record overall and a 3-1 record in the conference, good for second behind Harvard.

Cornell is coming off a 21-47 loss to Princeton last Saturday. The offense in this game was strong, generating 444 total yards of offense. However, the gave up 464 offensive yards and 26 more points than the offense could score. As usual, running back Luke Hagy was strong in this game racking up yet another 100-yard game with 128 rushing yards. He is now second in the Ivy League in rush yards per game despite the team having to give up on the run early in games due to large deficits. Hagy also had to leave one game very early due to an injury. Despite Hagy’s success, Cornell has the seventh ranked offense, both in yards and points per game, in the Ivy League. The lack of offense combined with a last place defense in points and yards given up has led to a disheartening season for Cornell so far.

Dartmouth also suffered a loss last week against Ivy League powerhouse Harvard by a score of 14-13. This heartbreaking defeat was Dartmouth’s first of the season but showed just how good they are. While the Big Green were two points away from beating the first place team, the Big Red lost to Harvard by 37 points earlier in the season. Dartmouth struggled to run the ball last week, as they have throughout much of the season, but found success through the air thanks to quarterback Dalyn Williams who had 311 passing yards and no interceptions. He also added 49 rushing yards to lead the team. Williams is one of the elite quarterbacks in the Ivy League as he is second in yards per game. The Cornell defense’s goal should be to focus on the air attack and force Dartmouth to use their struggling running backs. The Big Green might also have the best defense in the league as they have given up the least yards per game in the conference.

Cornell is the clear underdog this week but should be motivated for this matchup. Time is running out for Coach Archer’s team to get a win and this would certainly be a signature way of doing so. Dartmouth also needs the win to keep pace with Harvard and have a shot at the Ivy League title. Friday night will be the 99th all-time meeting between these two programs. Dartmouth holds the advantage going 57-40-1 in these contests.