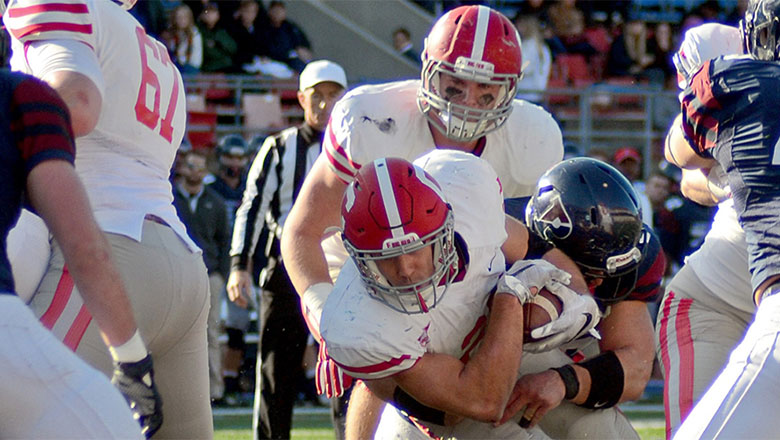 Cornell football closed out its difficult season with a 34-21 loss to Penn on Saturday in the Trustee’s Cup matchup. The loss left Cornell with a 1-9 overall record, equivalent to last year’s, including 1-6 in the Ivy League. Penn improved to 7-3 on the year and 6-1 in the conference, which gave it a three-way share of the Ivy League title with Harvard and Dartmouth. Cornell trailed by multiple possessions most of the game but made a few runs to get back into striking distance. However, Penn had answers for every comeback attempt to hang onto a sizeable lead.

Overall, the Big Red played well considering the caliber of opponent it was up against. The offense bounced back after struggling the last two weeks led by quarterback Robert Somborn who threw for 301 yards, the most he has passed for all season, and two touchdowns, although he did get picked off twice as well. Somborn also created some offense with his legs adding 26 yards and another score on the ground. His favorite target for the game was senior Chris Lenz who had a career day in his last game with seven catches for 136 yards. Running back Luke Hagy, another senior playing for the last time with Cornell, was also productive. He had 81 yards on 17 carries and added 45 yards and a touchdown on five catches. The touchdown came on Hagy’s last collegiate play. He will unquestionable go down as one of the best to play for the Big Red as he ranks fourth in all-purpose yardage (3,997), fifth in touchdowns (26), sixth in rushing yards (2,336 yards) and ninth in receiving yards (1,582).

Although the defense gave up 34 points, it played significantly better in the second half against a team that scored the second most points in the Ivy League. After giving up 27 points in the first half, the Big Red defense buckled down to give up just one touchdown in the final two quarters. The defense also managed to pick off Penn quarterback Alek Torgersen, something that teams struggled to accomplish all season long. Torgersen came into Saturday’s game with just two interceptions on the season, the least in the Ivy League, but sophomore safety Sean Scullen picked him off for his second interception in the last two games. Torgersen threw for 195 yards and two touchdowns on the day. Both touchdowns and 133 of those yards were caught by wide receiver Justin Watson, perhaps the most dynamic skill position player in the Ivy League. Penn running back Brian Schoenauer also added 118 yards and a touchdown on the ground.

While this season may not have been as successful as coach David Archer and his team had hoped for, the Big Red did show flashes of a good team throughout the year. It will surely miss the contributions of seniors like Hagy next year, but these players have helped form a future for this organization. Before the game, the seniors were given bricks with their names on it to illustrate the foundation they set up for years to come.

Cornell’s first game of the 2016 season will be a road game against Bucknell on Saturday, September 17.