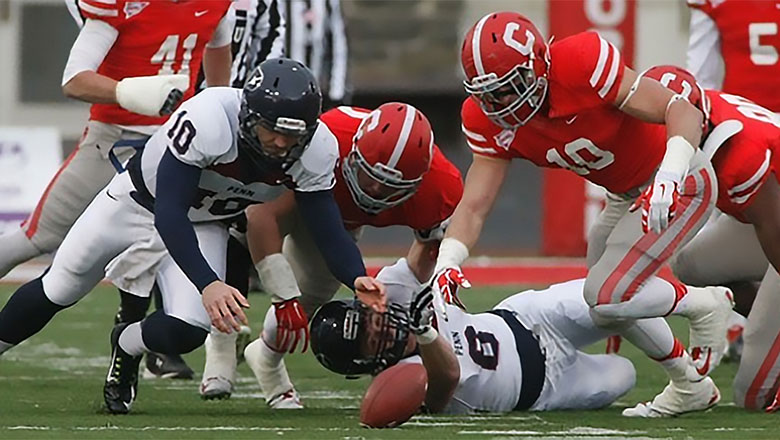 Cornell football will play its last game of the season this Saturday, November 21, at 1 p.m. against Penn at Franklin Field. The Big Red, who is coming off its first win of the season against Columbia, is 1-8 this season with a 1-5 record in the Ivy League. Meanwhile, Penn is having a great season at 6-3 and is tied for first in the Ivy League with a 5-1 record in the conference after beating the previously undefeated Harvard last week. Harvard and Dartmouth are the other current leaders in the Ivy League. The matchup between Cornell and Penn is known as the Trustee’s Cup, a tradition that has added more to the rivalry for over the last 21 years.

The Big Red will be coming into Saturday’s game with some momentum for the first time all season. It will be looking to close out the season strong with back-to-back wins and avoid finishing last in the Ivy League. They key to Cornell’s success has been the major improvement on the defensive side of the ball. The unit that had given up plenty of points all season long has flipped a switch giving up just 21 points in the last two games, including a shutout in last week’s win.

However, Penn is coming into this game scoring the second most points per game in the Ivy League at 32.8 points per contest. Quarterback Alek Torgersen has not thrown for too many yards this season, but he has the highest completion percentage in the Ivy League amongst starting quarterbacks at 69.2%, and is sporting an efficient 17:2 touchdown to interception ratio, best amongst Ivy League starters. A big reason for Torgersen’s success is his favorite weapon, wide receiver Justin Watson, who is leading the Ivy League in receiving yards and touchdowns. Watson’s 105.4 yards per game is good for 25% of his team’s offensive production. If Cornell wants to continue impressing on defense, it will need to find a way to contain Watson and make someone else beat it. Penn’s second leading receiver is averaging just 26.9 yards a game.

While the Cornell defense has been lights out over the last two games, the offense has put up just three points in its last two games in part due to the struggles of the passing game. Cornell will want to turn to senior running back Luke Hagy, who is second in the Ivy League in rushing yards, and will be playing his last game with the Big Red on Saturday. Penn is ranked sixth in the Ivy League in yards and points given up per game.

As Cornell did last week, Penn will be honoring its seniors during their last home game, giving the team something else to play for besides the Trustee’s Cup and an Ivy League title. Cornell also has some motivation in this game as well. A win would end the season on a two-game win streak, give the team one more victory than last season, help it to avoid last place, and play the role of spoiler for Penn.

Saturday will be the 122nd meeting between these teams dating back to 1893. Penn holds the advantage in the series going 70-46-5 in those games.