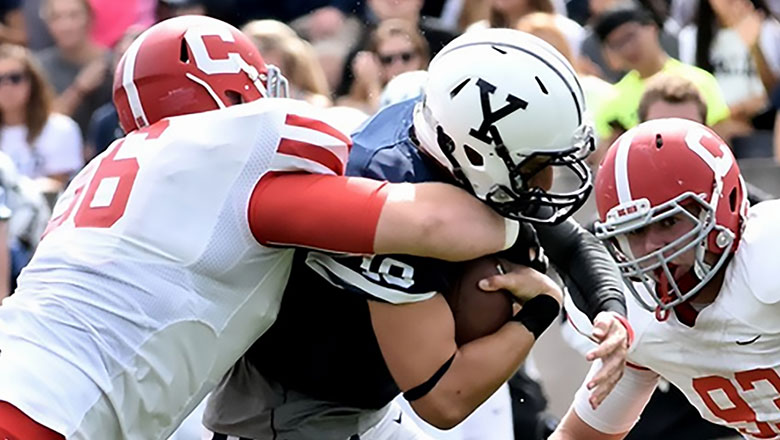 The Cornell Football team was unable to pick up their first win of the season after missing a great opportunity on Saturday at Yale. The Big Red allowed the Bulldogs to score 26 unanswered points to lose 26-33. This was the second straight 4th quarter lead that the team has lost but stung more as it was against an Ivy League division rival. Head Coach David Archer described it as “hitting the reset button.” It was also the second straight week Yale had rallied to comeback in the final quarter, which has gotten them off to a 2-0 start while Cornell is now 0-2.

Cornell got off to a great start on the road by going on a 26-7 run in the first half that saw quarterback Robert Somborn throw three touchdown passes and running back Luke Hagy run for another. Somborn’s third touchdown pass came with 47 seconds left in the half giving Cornell what looked like a comfortable lead going into halftime, but Yale shifted momentum with an 84 yard kick return and a 6 yard touchdown pass to make it a 26-13 game. Then came the 20-0 second half dominated by Yale. Still, Cornell was up 7 at the two-minute warning but Yale battled back to tie the game with 1:12 left after blocking a 42-yard field goal, which likely would have won the game for Cornell. After the game was tied, Cornell went three and out and gave the ball back to Yale with 49 seconds left. Bulldog quarterback Morgan Roberts then completed a 52-yard bomb to Sebastian Little with 32 seconds left for the game-winning touchdown. Cornell was unable to duplicate Yale’s magic as they went four and out for a turnover on downs, which sealed the game.

Luke Hagy continued his hot streak running for his fifth consecutive 100-yard game with a stat line of 117 yards, one touchdown, and 5.1 yards per carry. The last time a Cornell player had five straight 100 yard rushing games was in 1996 when Chad Levitt, who ended up playing in the NFL, did it six straight times. Hagy is now 8th all time on the school’s rushing yards list and 7th in all-purpose yardage. He also had six catches for 44 yards on Saturday. Wide receiver Collin Shaw also had a great game catching seven balls for 114 yards and two touchdowns. Quarterback Robert Somborn had a solid game throwing for 238 yards and three touchdowns with one interception, although most of those numbers came in the first half. The defense played relatively well most of the game against an explosive Yale offense but gave up 371 passing yards by the end of the game.

Coach Archer had his players work on late game situations in practice this week by focusing on third down defense and the two-minute offense, but it did not seem to produce the desired results, as this week’s loss could have benefitted from improved play in those facets of the game. However, the team can look to build off of a dominant first half of play. After the game, Archer touched on just that saying “I think anyone that watched Cornell-Yale play last year and Cornell-Yale this year would say “Whoa, those guys have put a heck of a lot of work in and are really progressing their program.” Cornell will be returning home for their next game on Friday, October 2 at 7 pm as they look for their first win of the season against Colgate.