Ithaca, NY – Cornell starts this season off 1-0. It’s the first time in two seasons the Big Red has started off the year with a winning record. For a while it looked impossible as Cornell kept beating themselves with penalties. The Big Red was able to get that in check and pull out a 24-16 victory over the Bison.

Dalton Banks, the sophomore out of San Antonio, Texas looked great in his debut as quarterback for the Big Red. He completed 17 of his 24 passes for 160 yards and a touchdown. He also rushed for 24 yards on seven attempts and scored twice. In short he was a one man wrecking crew on offense, scoring 14 of the 24 points scored by the Big Red. Matt Sullivan, the senior out of Pittsford, NY had two receptions for 28 yards and a TD. Banks connected with Sullivan on a beautiful 22-yard back shoulder throw to the end zone with 16 seconds left to go in the third quarter that helped put the game out of reach. 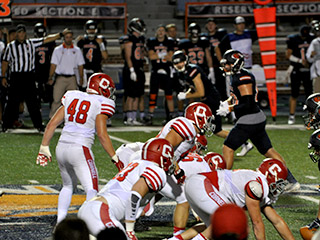 The Cornell defense looked strong throughout, but struggled to stop the big and athletic RB of Bucknell. Joey Defloria, the junior out of Greensburg, PA wreaked havoc on the Big Red defense rushing for 155 yards on 27 attempts and taking it to the promise land twice. The Bison struggled to get anything going with their passing game. Matt Muh, the junior out of Oceanport, NJ completed 17 of 33 attempts of his passes for 215 yards, no touchdowns and two picks. The Big Red defense held the Bison to 392 total yards of offense. The Bison rushed for 177 yards and threw for 217 yards.

Bucknell’s defense couldn’t do anything to stop Banks and Cornell’s offense. The Big Red put up 348 total yards of offense rushing for 188 and passing for 160. Chris Walker, the sophomore out of Lewisburg, TE lit up the Bison defense rushing for 133 yards on 16 carries averaging 8.3 yards per carry. DJ Woullard, the sophomore out of Fullerton, CA led the way on defense for the Big Red with two picks.

Coach Archer was pleased with the teams overall performance. “I am so proud of the total team win, actually a total program win. Everyone involved with our program came together to earn a victory against Bucknell.”

The toughest part of Cornell’s season begins now. Their next three games are against Yale, Colgate and Harvard. Harvard was the Ivy League Champion last year. Cornell’s homecoming weekend game against Yale will kickoff on Saturday, September 24th, at 3:00 pm. Make sure to go and show your support. The following week they will play Colgate on the road in Hamilton, NY at 1pm and Harvard the week following that in Cambridge, MA with the game also kicking off at 1:00 pm.