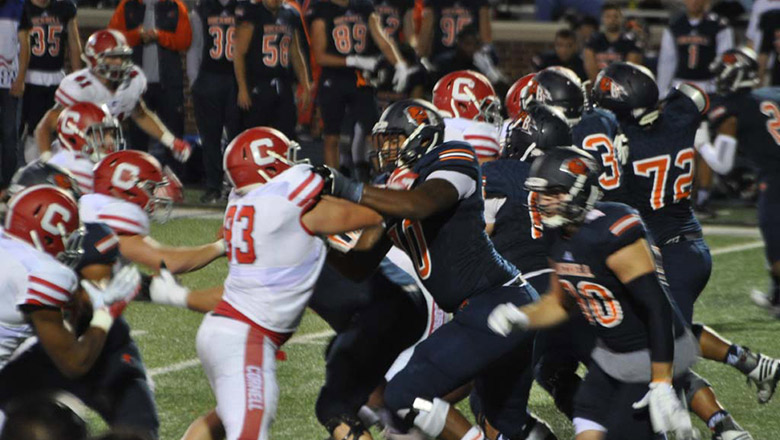 Christy Mathewson stood tall among John McGraw’s New York (baseball) Giants of the early 20th century. He was one of the first five to enter the Baseball Hall of Fame, but may not be widely known for football prowess.

Still, he was a Walter Camp “12th All-America” in 1900. It turns out he was a hard-hitting fullback at Bucknell who could score afoot from far out and a power punter and drop-kicker. The Bucknell football stadium is named for him. He probably never met Jennie McGraw Fiske, the donor of our Libe Tower chimes.

Anyway, Bucknell is highly senior among Cornell’s most ancient rivals, the sixth to be met (in C.U.’s second season –1888) and fourth to be defeated, 20-0, in that 4-2 year. Bucknell was one of ten beaten and one of five shut out by the 10-2 1900 Red of coach Percy Haughton, a successor to Pop Warner.

From the beginning in ’87 to 1978, Bucknell beat Cornell once in 27 meetings, 4- 0, in 1891. It isn’t easy even to find a close one. In 1943 Sam Woodside inquired in a game program article, “who in’ell is Bucknell anyway?” A Big Red team largely utilizing military training transfers from other schools, like Penn co-captain-elect Cleo Calcagni, who played in carnelian but insisted on wearing his Penn helmet, edged Bucknell 7-6. So Woodside later wrote that he “felt a little guilty” when he learned who indeed Bucknell was “this year”.) Norm Dawson’s third quarter 10-yard pass found single wing wingback Howie Blose in the end zone. Dawson added the PAT. Bucknell managed a late TD but missed a field goal near the end. The Red defenders held that bulky bunch of Bisons to 29 yards rushing and two first downs. The Redmen rushed for 206 and made 15 first downs. Calcagni, Blose and artful, shifty hipped dodger, the elusive tailback Bill Maceyko (5-foot-7, 160-lbs.), switched militarily from Syracuse, made honorable mention All-America with coach Carl (the Grey Fox) Snavely’s 6-4 team.

Snavely went 42-16-8 as Bucknell coach from 1927-33 and coached North Carolina in 1934-’35 before taking over at Cornell in ’36. A builder of better mousetraps with All-Americas like end Brud (End Around) Holland, tackle Bill McKeever, guard Sid Roth (all three first team All-America in ’38) and, in ’39 tackle/placekicker and, in years to come, wildlife conservation artist Nick Drahos, Snavely developed teams that won 46 games (third ever among Big Red leaders) in 14 years far above. Two of those wins were over THE Ohio State University, in 1939 and ’40.

Snavely was the first coach to use home movies for coaching purposes. His unbeaten ’39-ers were ranked first in the land. The ’40 team was number one until the Fifth Down turned up on film. What appeared to be a winning TD at Dartmouth came on an illegal Fifth Down, the game film showed. Snavely and his team agreed not to accept a tainted triumph and so the score stands Dartmouth 3, Cornell 0.

Among Snavely’s players on his 1930 Bucknell team was end George Kepford (Lefty) James, who followed Snavely to Cornell and wound up with his job when Snavely went back to North Carolina. James was quick to install a two (offense and defense) platoon system when it became legal. He combined Snavely-style single wing blocking with his own version of the ever more used new-fangled T. James’ 66 wins at C.U. are second only to Gil Dobie’s 82. He didn’t go to North Carolina with Snavely but Maceyko did.

The spirit of John McGraw walked Coogan’s Bluff, far above the Harlem River that skirts Upper Manhattan and Christy Mathewson was warmly remembered in Lewisburg when Pete Noyes was appraising the plays of Willie Mays and Bobby Thomson at the Polo Grounds. Pete became an all-time all-teamer with the Purple Knights of the University of Bridgeport and in due course defensive coordinator and linebacker coach at Bucknell for six years. He came to Cornell in 1977, developing defenders who didn’t give up many points. The O-line he shaped in the co-title year of 1990 had three first team All-Ivies — center Greg Finnegan, guard Chris Field and tackle Jay Bloedorn, to make room for John McNiff and Scott Oliaro to dash through daylight. He kept up the good work as Director of Football Operations, making huge gains in football’s annual fund, causing giant increases in the Cornell Football Association (CFA) membership and similarly putting the Ben Mintz/CFA summer golf outing deeper in the long green.

After Springville, Wohlhueter did tours of duty at his alma mater, Ithaca College (1965-’67) and Bucknell (1967-’77) as Sports Information Director. Besides producing and providing background information on Cornell’s many intercollegiate sports from 1977-’98 he spent years as press liaison to the Olympics and Pan American Games. From 1977 to 2012 he was treasurer of the College Sports Information Association of America (CoSIDA) Hall of Fame, which honored him with its Distinguished Service Award in 2012, one of the many recognitions he has deservedly received. Like the CoSIDA Hall of Fame, Secretary of the Board of the Ithaca College Alumni Association Board, and the Ithaca College and Cornell Athletic Halls of Fame, to name but a few. Retired from C.U. David generously continues to give it his time, experience, expertise, imagination and devotion.

Wohlhueter was in on classic clashes between Cornell and Bucknell, such as Saturday, September 20, 2008. “A great one,” says he. Cornell’s first drive sputtered when Bucknell picked off a pass at the 10 and quickly seized the lead. At halftime, it was 14-all. Early in the second half, Cornell stopped Bucknell in its tracks and fashioned a 61-yard march. QB Nathan Ford launched the leather into the end zone, where jumping Jesse Baker outleaped three high bouncing Bisons for six points. The Thundering Herd moved the pigskin 80 yards in six plays to Shaun Reynolds’ second TD pass catch of the day but backer Graham Rihn shot a gap and blocked the PAT attempt. Bucknell had a last chance. Its backup Sam Nana Sinkham, who made 18 tackles that night, snitched a Ford forward on the one and hustled it out to the 29. But the Cornells held firm. The Bucknells had to punt and never got the ball back. It was Cornell’s day, a 21-20 thrill a minute evening.