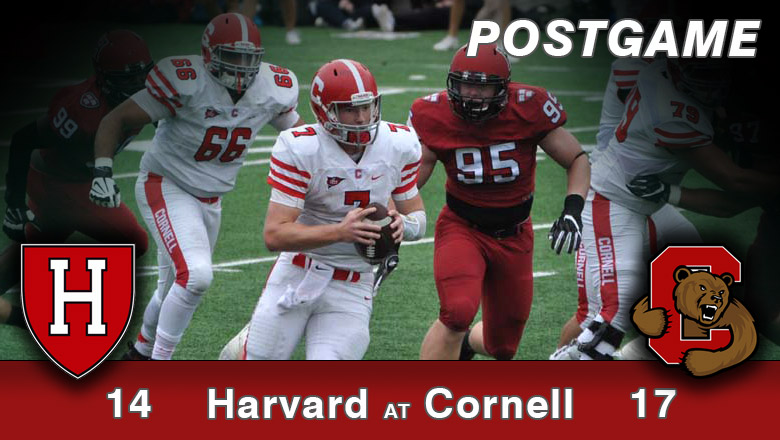 ITHACA, NY. – Cornell football earned its first win of the season with a 17-14 victory over Harvard on Saturday at Schoellkopf Field. The win left Cornell with a 1-3 overall record, and 1-1 in Ivy League play. Harvard fell to 2-2 on the year and is 1-1 in the conference, which gives it a three-way share of third place in the Ivy League with Cornell and Yale. Cornell trailed by multiple possessions 20 plus minutes into the game, but they scored a TD with 3:02 left to go before the half and the momentum shifted in the Big Reds favor.

Overall, the Big Red played extremely well considering the caliber of opponent it was up against. The offense bounced back after scoring just seven points in a loss the previous week against Colgate. Dalton Banks threw for just 117 yards and tossed another interception; he has now thrown ten through four games this year. Senior second-stringer Jake Jatis was the star of this one, scampering for 26 yards on seven carries and scoring two touchdowns. The first QB scramble cut the lead to seven with 3:02 left to go before the half, and the other one tied the game at 14. After Banks drove them down the field late in the game, junior kicker Zach Mays would make the biggest field goal of his career and thrust the Big Red to a 17-14 victory over Harvard.

The defense put up by far its best performance of the year, holding an offense that had averaged over 40 points-per-contest over its last two meetings to just 14 points. After giving up 14 points in the first half, the Big Red defense buckled down and didn’t allow a single point the rest of the game. The defense also managed to pick off Jake Smith, a quarterback that has thrown three interceptions over his last two starts this year. He came into the game having thrown just two picks so far this season, but sophomore linebacker Dylan Otolski picked him off for his third in his last two meetings.

While Cornell’s success hasn’t come as quickly as coach Archer would have liked this year, the Big Red can let this momentum-changing victory soak in and try to earn its second-straight win next week against Bucknell, a team the Big Red beat 24-16 in their season-opener last season. Cornell now more than ever needs to use their season-changing victory over the Crimson to climb its way back into the Ivy rankings race.