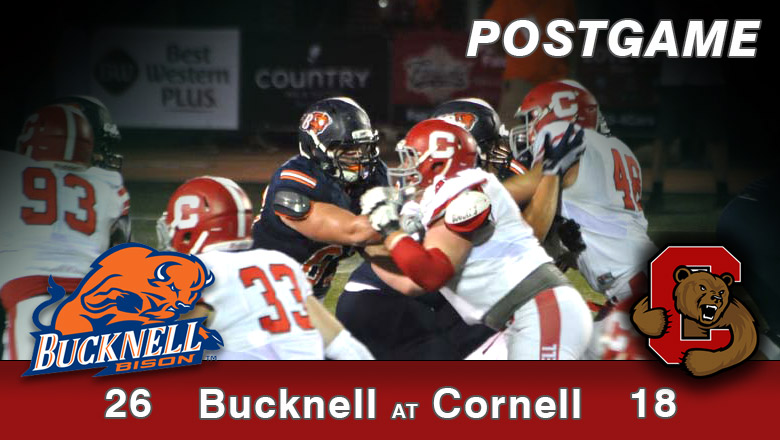 ITHACA, NY. – Cornell football suffered another tough 26-18 loss to Bucknell on Saturday in the “Battle of the Nells”. The defeat left Cornell with a 1-4 overall record, opposite to last years, but they’re still 1-1 in the Ivy League. Bucknell improved to 3-3 on the season and are 0-1 in their conference. The Big Red trailed by multiple possessions most of the game but made a couple of plays late to get within striking distance. However, Bucknell had answers for every comeback attempt to hold onto a sizeable advantage.

Overall, the Big Red played well considering the caliber of opponent they were up against. The offense played well for a second-straight week, putting up 18 points against a well-coached Bucknell squad. Dalton Banks went 17/28 (60.7% completion rating) for 160 yards, a touchdown and for the first time this season didn’t throw an interception. Second-string quarterback Jake Jatis helped put the first touchdown on the board for the Big Red on a nine-yard dart to sophomore wide receiver Davy Lizana three minutes into the third-quarter. Sophomore wide-out Owen Peters also put up a good performance, with four receptions, including a touchdown catch with 39 seconds left to go in the game.

Although the defense didn’t play as efficiently as last week, they only surrendered 26 points to a Bison unit that prior to this outing was averaging 33 points-per-matchup over their previous two games. After allowing just 10 first-half points, the Big Red defense ran out of gas, giving up 16 points over the next two quarters. John Chiarolanzio methodically picked apart the Big Red’s secondary, completing (68.7%) of his throws (11/16) for 176 yards and two touchdowns, while senior tailback Joey Defloria dashed for 99 yards on 20 carries averaging five yards per-attempt.

While this season hasn’t been as successful as Coach David Archer and his team had hoped for, the Big Red have continued to compete and show grit on the field. Cornell’s next game will be against Brown (2-3), with the chance to improve to 2-1 in Ivy League play. It would be the first time since the year 2000 that has happened if Cornell can come out with a win on Saturday, October 21. Kickoff is set for 3 PM Eastern at Schoellkopf Field.