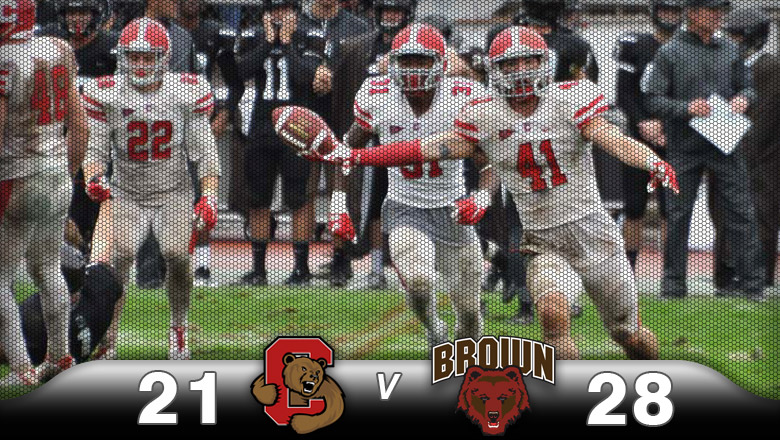 No matter whether or not you’re a fan of the college football overtime format, there’s little debate about the suspense that the OT session generates, especially when it’s comes down to a fourth down play. Unfortunately, the Cornell football team was on the wrong end of a fourth down overtime situation—and not once, but twice.

Cornell and Brown began the OT session Saturday in Providence with the score tied 14-14. Big Red offense got the ball first, and in very workmanlike fashion scored in five plays. Sophomore quarterback Dalton Banks connected with senior receiver Marshall Deutz in the left corner of the end zone for a 13-yard touchdown, and Cornell jumped out on top, 21-14.

Brown began its offensive series with a 23-yard pass on first down to move the ball to the Big Red 2-yard line. The Cornell defense stopped two rushes for no gain and successfully defended pass on the next play, making it do-or-die for the Bears with a fourth down play. One more stop and the Big Red would claim a come-from-behind victory and defeat Brown for the first time since 2008. But quarterback Thomas Linta threw a TD pass to Alex Jette, enabling Brown to even the score and force a second overtime session.

The Bears began this OT by scoring in five plays to go back on top, 28-21. Now it was Cornell’s chance to mirror what Brown had one in the first overtime. The Big Red was able to convert on a fourth and one play to keep the game alive when Banks ran for two yards to take the ball to the 14-yard line. Three incomplete pass attempts made it fourth down once again. Banks threw to Deutz on the right side of the field for a chance to reach the first down marker. Deutz fought hard to get the first down, diving to try and cover the 10 yards. But he was stopped two yards shy, ending the game and Cornell’s attempt to end an eight-game losing streak against the Bruins.

“I’m just stunned we lost,” Head Coach David Archer ’05 said to the Cornell Sun after the game. “There was no doubt in my mind we were going to win, especially when we scored first [in overtime].”

The game was played in terrible conditions, especially in the first half when heavy rain made the ball heavy and the field slippery and very muddy. The weather severely affected the quality of play. The two teams completed only four passes combined in the first half. It also didn’t help that Cornell was playing its first game on grass since the last time it played Brown in Providence two years ago.

Cornell was fortunate to be down just 7-0 at halftime. Brown out-gained the Red 151-66 but was stopped on fourth down at the Cornell 25 in the first quarter, and the Bruins missed two field goal attempts of less than 30 yards in the second quarter. However, Brown took the lead on a 79-yard punt return by Jette with 1:49 to play in the half.

Brown expanded its lead on the first series of the third quarter when Jette caught an 18-yard touchdown pass. Jette, one of the premier receives in the league, has been a thorn in Cornell’s side for two years now. He registered 157 receiving yards in Ithaca last year and finished Saturday’s game with 196 total yards and three touchdowns.

“Jette in the open field is tough,” Archer said to the Sun. “He’s a really good athlete and when you get him you have to put him down. You can’t miss a tackle in open field space.”

The Cornell offense finally got untracked on its first possession of the second half, responding to Brown’s score with a TD of its own to cap a 10-play, 85-yard drive. Banks completed five straight passes, the last one being a 9-yard touchdown to senior tight end Matt Sullivan to make it 14-7 with 9:15 to play in the third quarter.

Three series later, a tremendous play by junior linebacker Kurt Frimel set up Cornell’s tying touchdown to make it a brand new game. Frimel forced a fumble and then scooped up the ball and returned it 71 yards to give the Big Red the ball at the Brown 8-yard line. Senior receiver Ben Rogers caught a five-yard touchdown pass from Banks to tie the score with 3:21 left in the third period.

Neither team was able to score in the fourth quarter, although both teams had their chances. Nicholas Null’s 33-yard field goal attempt was blocked with 3:50 to play. Junior safety Nick Gesualdi’s fifth interception of the season gave Cornell the ball back at the Brown 48-yard line 22 seconds later, but the Big Red offense was unable to capitalize. The Bears took over and advanced to the Big Red 21, setting up a 38-yard field goal attempt to win the game with six seconds on the clock. However, Jake Hall’s kick was short and the game headed to overtime.

The loss drops the Big Red to 3-3 overall and 1-2 in the Ivies. Brown won its first league game, as it is also 1-2 in Ivy Play and 2-4 overall. Cornell returns home to play Princeton on Saturday, beginning a two-game homestand and a chance to regain the success it enjoyed to open the season.

“It hurts right now,” Archer said to the Cornell Sun, “but tomorrow when the sun comes up it’ll be time to move on keep pressing this thing forward.”