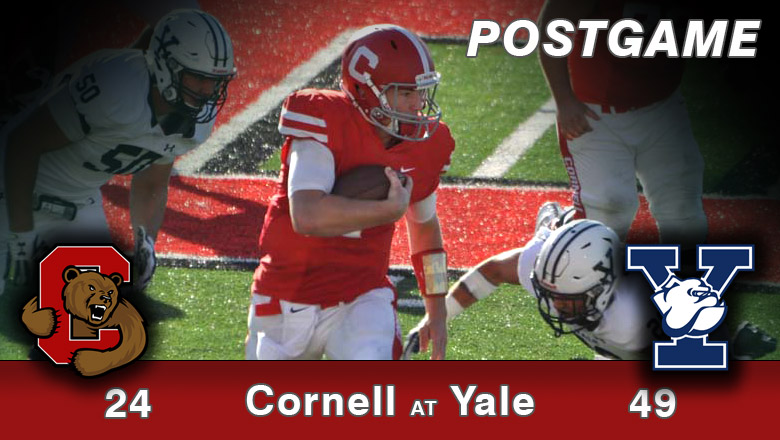 NEW HAVEN, CONN. – Cornell’s Ivy League opener didn’t go as planned with a 49-24 loss to Yale on Saturday, September 23, at the Yale Bowl. The loss pushed Cornell to 0-2 to begin the season for the third time in the past four years, with the exception of last season, where they won their first three matchups. Yale improved to 2-0 on the year and 1-0 in their conference, which tied them with Harvard for the top spot. Cornell held the top scoring offensive team to just 14 points through the first half, however, Yale responded in the second and never looked back.

Overall, the Big Red got off to a great start considering the quality of opponent they were playing against. The offense actually outplayed the Bulldogs in the first-half holding a 10-7 lead at one point but would end the half down by four, 14-10. Dalton Banks threw for 247 yards and two touchdowns, although he couldn’t play mistake-free for the second-straight week, throwing two more interceptions; he now has thrown five through his first two games. His favorite target for the game was senior wide receiver James Hubbard, who had three receptions for 82 yards and a TD. Wideout Chris Walker, a junior, also contributed, catching five balls for 28 yards and a score. The biggest performer was sophomore running back, Harold Coles, who rushed for 101 yards on four carries, including a 90-yard TD run, with 14:33 left to go in the fourth. It was the first time this year the Big Red have had a 100 yard rusher and the first time they were multi-dimensional.

Although the defense gave up 49 points, they got out to a much better start in the first half against Yale, than they did the previous week against Delaware. After giving up 14 points in the first two quarters to a team that leads the Ivy’s in scoring averaging 52.5 through their first two games, the Big Red defense would allow 35 points in the second-half. The defense struggled to get off the field, as Kurt Rawlings completed 58.8% of his throws (10/17) for just 176 yards, a touchdown, and an interception, but it was the rushing attack that gave them fits. Zane Dudek, one of the top running backs in the conference rumbled for 173 yards on 16 carries and a touchdown, and Deshawn Salter racked up 144 yards on 12 carries and scored three TDs.

As good as Cornell played in the first-half, they were unable to put up that same type of effort for 60 minutes and lost to Yale for the 12th time in their last 17 meetings. The Big Red will look to rebound next week, when they host Colgate on September 30, in their home opener at Schoellkopf Field. The game is set for 1:30 PM Eastern.