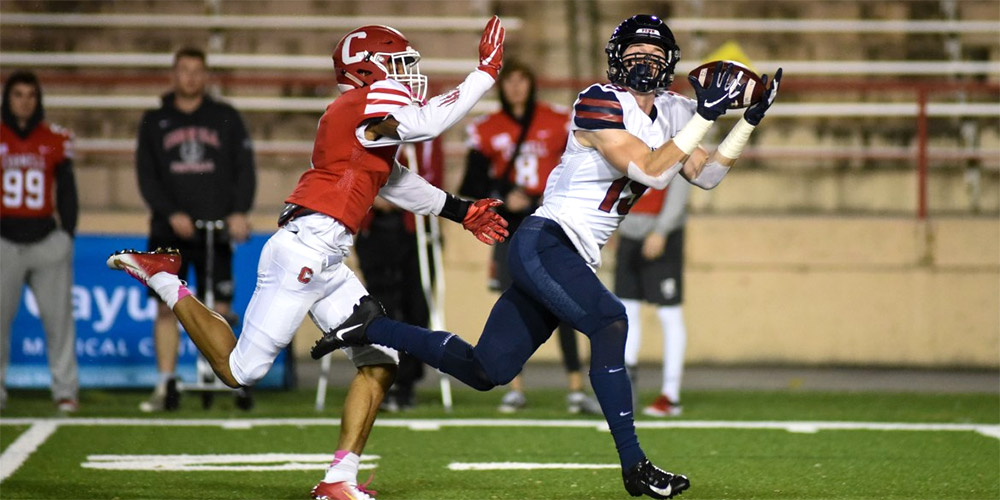 With the moon poking through the overcast over the Schoellkopf crescent, Cornell football and Penn butted heads to try and win a nationally televised football game the old-fashioned way: running and defense. But it was Penn which out-ran and out-defended Cornell to come out on top, 20-7, to capture its fifth consecutive Trustees’ Cup.

Looking for its first winning season in league play since 2005 and a pick-me-up from last week’s thrashing at the hands of Princeton, Cornell was instead outpunched by Penn, unaided by the ejection of two key defensive players. The Red’s 2-3 record in league play means it will have to go undefeated in its remaining two games to end the 13-year skid.

Tonight I’m just heartbroken for the effort the guys put in playing on national TV and playing at home,” said head coach David Archer ’05. “There’s still plenty to play for — a winning record in the Ivy League and things of that nature — but now I’m just thinking about tonight.” 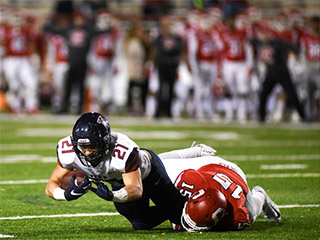 At first, the quest for over .500 appeared to be on course. The Red opened the game with a promising drive, marching inside the five-yard line from midfield. But the Penn defense stuffed five consecutive goal line attempts for a turnover on downs. Instead of going for an easy three points, Cornell elected to go for it on fourth down from three yards out, but senior quarterback Dalton Banks was stymied before the goal line.

“It’s tough to come out, get to the goal line like that and not put points on the board,” said senior offensive lineman Henry Stillwell. “The rest of the game we had our chances. Things just really didn’t go our way.”

A few drives later Penn took the game’s first lead on a field goal. A 45-yard bomb brought the Quakers into the red zone where Penn, too, was unable to punch the ball in for six. The Quakers instead took the points and the lead on a 20-yard field goal from Jack Soslow with 12:50 left in the second quarter.

Cornell proceeded to get the ball back and put together another long drive, capping this one off with a touchdown to take the lead. After methodically working its way up the field, the Red offense found the end zone on a third and long 13-yard pass from Banks to senior wide receiver Lars Pedersen. Pedersen made the short catch, followed a block from his teammate and wiggled through a few Penn tacklers for the score. 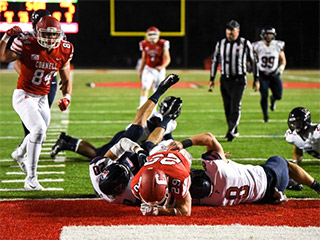 Cornell started the second half with the ball but sent it back to Penn on a three-and-out. The Red defense looked good to start the drive, but a costly targeting penalty on junior safety Jelani Taylor turned a fourth-and-one into a Quaker first down in Red territory. It was the second targeting of the game against Cornell after sophomore linebacker Lance Blass was ejected in the first half.

Penn pulled out a tricky formation, and with the help of a Cornell facemask, moved the ball inside the 10, where running back Karekin Brooks took it to the house to take back the Quaker lead, 10-7.

“[Losing Taylor and Blass] took away one of our entire personnel packages,” Archer said of losing two of his starters. “We thought we had a pretty good personnel grouping that could help us against Penn and that kind of took that out of the equation…[Taylor] is the quarterback out there though, there’s no doubt about it. He stirs the drink lining it up.”

The Red answered with another solid yard-eating drive, but this one stalled out at the 20-yard-line due in part to a long sack. Senior kicker Zach Mays missed on the field goal attempt, a line drive left.

The Red was in a tough spot at the start of the fourth quarter, down 10-7 with the Quakers threatening on Cornell’s side of the field. On the third play of the quarter, Penn quarterback Ryan Glover connected with a wide-open Christian Pearson in the end zone to extend the Quaker lead to 10 points. Cornell logged another three-and-out and didn’t see the ball again until Penn had capped off a grueling eight-minute drive with a field goal, a Pyrrhic victory for the winded defense. 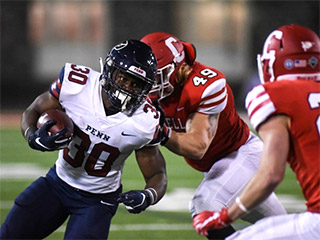 They took advantage of us losing one of our guys in the secondary,” said senior linebacker Maxwell McCormick. “They started going to the air a little bit, but we were there. We just have to make the plays.”

“They sustained drives, and we didn’t capitalize on our opportunities to sustain drives,” Archer added. “We didn’t make enough plays throughout the course of the game.”

Down two touchdowns late in the game, Cornell’s run-centered offense stood little chance at a comeback. The Red moved deep into Quaker territory on a surge of medium passes and nearly scored twice: one touchdown catch was called off on a holding penalty and another touchdown pass was dropped in the end zone. The Red comeback hardly got off the ground.

But even on an abysmal night, the players still were able to soak in the novelty of playing under the bright lights of Schoellkopf on a Friday night — something many haven’t done since their high school playing days.

“It was surreal,” McCormick said. “Me being a senior, it was my last chance to do that and I tried to take full advantage of it and go out there with my guys and get a win. It was amazing — I loved it.”