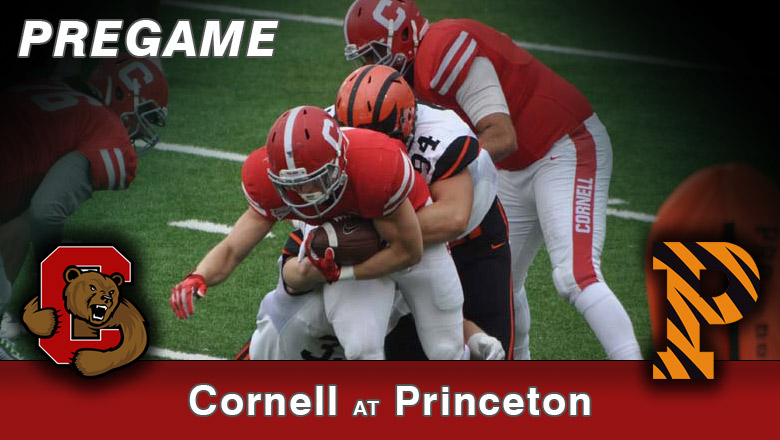 ITHACA, NY. –Cornell will play its seventh game of the season this Saturday, October 28, at 7 PM against Princeton at Princeton University Stadium. The Big Red, who is coming off its second win of the season against Brown, is 2-4 this season with a 2-1 record in the Ivy League. Meanwhile, Princeton is having a great year at 5-1 and is tied for second in the conference at 2-1 with Cornell, Yale, and Dartmouth.

The Big Red will be coming into Saturday’s game having momentum for just the second time this year. It will be looking to earn back-to-back wins for the first time all year and take sole possession of second place in conference play with a victory against Princeton. The key to Cornell’s success has been their improvement on offense and defense. The unit allowed an average of 37 points-per-game through its first three matchups while only scoring 15 points per-contest during that time frame. Over their last three games, they have surrendered just 15.6 points per-matchup and have scored a season-high 23 points per-meeting over that span.

However, Princeton is coming into this matchup as one of the highest scoring offenses in the league over its past few weeks, averaging 51.6 points per-contest over its last three games. Senior quarterback Chad Kanoff is coming off one the best performances of his career last week against Harvard. In the first half, he completed 100% percent of his throws (20/20), coming just nine completions shy of tying the FCS record for consecutive completions, which is 29. Kanoff finished completing 88.5% of his throws for 421 yards, two touchdowns, and no interceptions for an elite-level 135.8% quarterback passer rating. Through six games, he has thrown 17 touchdowns to just five picks and has completed 76.5 % of his throws for over 1800 yards. Their most lethal weapon has been junior wide-out Jesper Horsted, who has 55 receptions for 712 yards with eight touchdowns, averaging 118.7 yards-per-game. If Cornell wants to continue their dominant defensive performance, they will have to find a way to slow down Horsted and make someone else beat them.

While the Big Red defense has improved over its last two games so has the offense. They will need to be multi-dimensional on both sides of the ball if they want to give themselves a chance to pull off an upset on the road against one of the best teams in the Ivy League.

The game will begin at 7 pm on Saturday, October 28, at Princeton University Stadium and will be broadcast on the NBC Sports Network. Tune in and make sure to cheer on the Big Red as they look to improve to 3-1 in conference play for the first time since 1990.