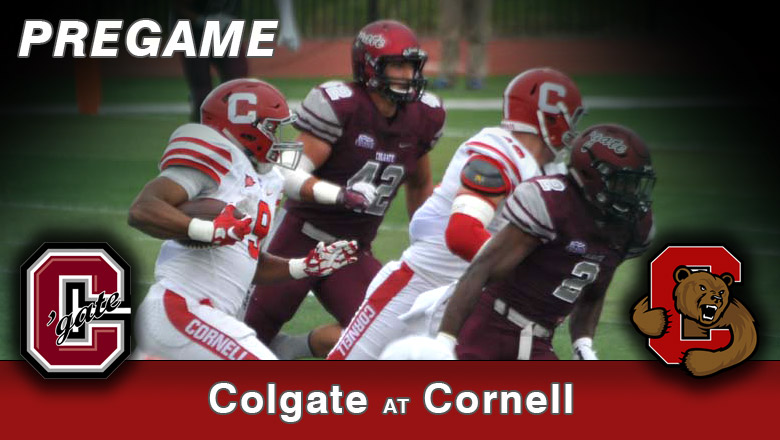 ITHACA, NY. – Cornell football will play its third game of the season this Saturday, September 30, at 1:30 PM against Colgate at Schoellkopf Field. The Big Red, who is coming off its second loss of the year against Yale, is 0-2 this season, with a 0-1 record in the Ivy League. Meanwhile, Colgate is having a rough season at 1-3 and has yet to play a conference game. Last year, Colgate held a 25-point advantage heading into the second half before Cornell rallied late and earned their 49th all-time victory against the Raiders. This year the Big Red will look to get off to a more efficient start.

The Big Red will be coming into Saturday’s game having scored the most points they have all season. Cornell will be looking to rebound from their devastating 49-24 defeat against Yale. The key will be the Big Red’s ability to stop the rush, something they had no success with against Yale, which put up over 300 combined yards rushing against Cornell. The unit gave up just 14 first-half points and looked strong against the Bulldogs, but then fell apart by surrendering 35 second-half points en route to another loss.

However, Colgate is coming into this game scoring just 24 combined points over their last two meetings against Buffalo and Furman. Over those two meetings, the Raiders are averaging just 12 points per contest and have not had success on the ground. Alex Mathews ran for just 62 yards on 20 carries, and their quarterback Grant Breneman threw for 217 yards and two touchdowns against Furman. That was a rebound effort from the previous week against Buffalo when he went 6/23 (26% completion rate) for just 56 yards. A big reason for the Raiders struggle has been their inability to have any type of consistency in their passing game or ground game. Over the last two games, they have a QB who threw for just over 50 yards in one outing and over 200 in another and a half-back that ran for 33 in one matchup and just 62 in another. This could be Cornell’s best chance to earn a victory this season.

While Cornell’s defense has struggled to play a full 60 minutes this season, giving up 90 total points, 49 of which have come over their last four quarters of play, not all is lost. Last week against Yale the Big Red was finally able to establish a ground attack and it came through their sophomore running back Harold Coles. He rumbled for 101 yards on four carries and even exploded for a 90-yard TD run late in their matchup against the Bulldogs. A solid performance could earn them a much needed win, one that could boost their confidence through the rest of the year.

Saturday will be the 99th meeting between these two teams. Cornell holds the advantage in the series going 49-46-3 in those games.