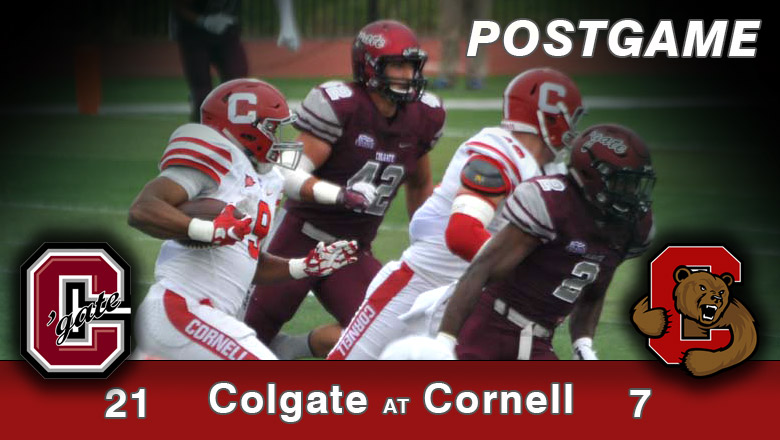 Ithaca, NY. – Cornell football suffered another frustrating setback this season with a 21-7 loss to Colgate on Saturday, September 30th, in their home opener at Schoellkopf Field. The loss left Cornell with a 0-3 overall record, opposite of last year’s squad, which through their first three matchups hadn’t lost a game. Colgate improved to 2-3 on the year and will play their first conference matchup against Lehigh University this Saturday, October 7th. After one quarter, neither team could put up points, but then Colgate put up two scores in the second quarter and things turned sour for Cornell.

Overall, Cornell gave a quality effort despite the fact Colgate came in on a scoring drought averaging just 12 points-per-contest over their last two meetings. Junior quarterback Dalton Banks had another rough performance, throwing 22/43 (51% completion rating) for 239 yards, no touchdowns, and a season-worst four interceptions; he now has nine interceptions through his first three games, just five less than the 14 he threw all of last season. However, Banks did score the only touchdown in the game for the Big Red on a one-yard scamper late in the third quarter, making it a one-possession game, 14-7 in favor of the Raiders.

Although the defense gave up 21 points, it did play very well for two-quarters, not allowing a single point to come across. After holding Colgate off the board in the first, the Raiders scored two touchdowns in the second to create separation. The first score was on a seven-yard connection from freshman quarterback Grant Breneman to junior wideout Thomas Ives, and the second was on an eight-yard QB scamper by Breneman with 4:43 left to go before the half. The Raiders at that point took a commanding 14-0 lead and held that advantage going into the locker room at halftime. After Cornell scored on a Banks scamper late in the second-half, Breneman would connect on a seven-yard dart to freshman tailback Malik Twyman, with 9:39 left in the fourth quarter to make it 21-7, and put the contest out of reach for good.

While the season hasn’t gone as David Archer would have planned, the Big Red has continued to show a lot of grit throughout the season. Cornell’s next matchup will be against Harvard (2-1), a team that shared the Ivy League Championship honors with the University of Pennsylvania back in 2015. The game is set for a 1:30 PM Eastern Time kickoff at Schoellkopf.