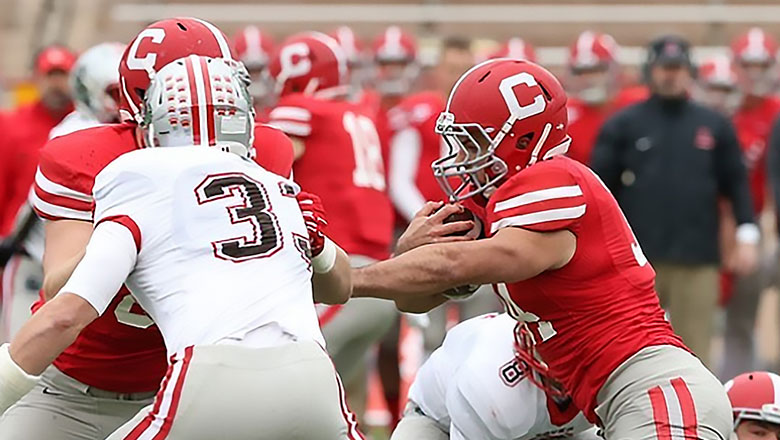 Cornell football lost its sixth game in as many tries this season on Saturday against Brown. It was another loss to an Ivy League rival as the final score was 44-24. Brown improved to 4-2 overall and 2-1 in the Ivy League while Cornell fell to 0-6 on the season and 0-3 against Ivy League opponents. This game marked the second half of Cornell’s season, which exclusively features Ivy League teams. Unfortunately, the Big Red was unable to capitalize on this chance to get back into the conference race.

Cornell got off to a poor start in the game quickly getting down 28-3 in the second quarter and ended the half down 34-10. The Big Red did begin to rally and cut the deficit to 10 points at 34-24 after a pair of Robert Somborn touchdown passes, but Brown responded to score the game’s final 10 points to seal the victory. The offense for Cornell was led by Somborn who had three touchdown passes and no interceptions, although he completed just 18 of his 38 attempts. The offense was without its focal point, running back Luke Hagy who was injured in last week’s game, but still managed to gash Browns defense for 260 rushing yards and averaging 6.7 yards a carry using a running back by committee technique. This was the most yards Cornell has rushed for since October 17, 2009 when they ran for 284 in a 38-27 loss to Fordham. Wide receiver Ben Rogers was also a highlight for Cornell with 5 receptions for 109 yards and two touchdowns.

The defensive unit for Cornell struggled to contain Brown offensively. Quarterback Marcus Fuller showed why he might be the best passer in the Ivy League by adding 312 more passing yards to his already stellar numbers this season. He also threw two touchdowns with no interceptions on the day. His favorite receiver was Alex Jette who had a monster day catching nine balls for 157 yards and one touchdown. Jette’s breakout game may have been a result of Coach Archer trying to take Troy Doles, who is one of the most dynamic receivers in the Ivy League, out of the game with double teams that opened up the field for other players. Doles was held to just 58 yards, a pedestrian number for him compared to the rest of his season. Brown was also able to run the ball effectively on the ground; led by running back Johnny Pena who had 25 carries for 112 yards and hit pay dirt four times on Saturday. Linebacker Norris Miles played a good game with eight tackles and one forced fumble on the day.

Cornell has now lost eight straight games against Brown and seven straight overall. Next up is an away game at Princeton on Halloween, which is Saturday, October 31. Kickoff will be at 3:30 pm. Princeton is 4-2 overall and 1-2 in Ivy League games.