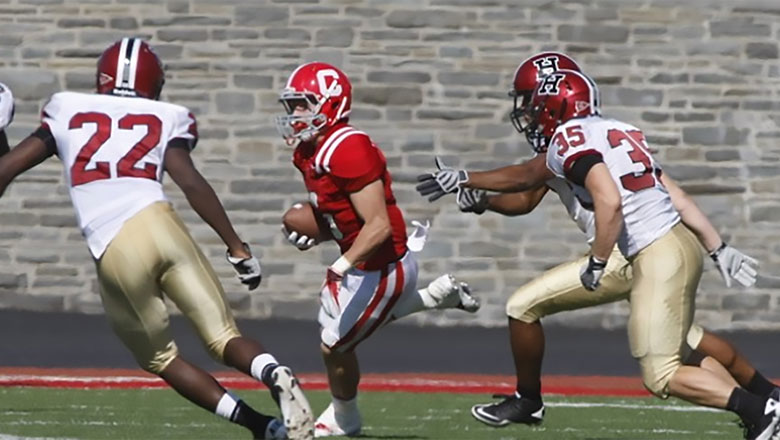 Cornell will play its fourth game of the season this Saturday at 12 p.m. at Schoellkopf Field, October 10th against Ivy League rival and powerhouse Harvard. The Big Red is still looking for their first win of the season at 0-3 while the Crimson has been dominant thus far going 3-0 and outscoring their opponents 139-37. This will likely be Coach Archer’s most difficult task of the season. The game will be nationally televised on the American Sports Network.

Harvard is coming off a shutout performance against Georgetown that saw them score 45 points. The rushing game was the primary weapon for Harvard as they ran for 245 yards and scored all six of their touchdowns through the run. Paul Stanton scored twice and had 113 yards on the ground while averaging 7.5 a carry. Noah Reimers added 64 yards and another three touchdowns as well on the ground. Harvard’s defense was also lights out giving up just 222 yards, including a measly 110 passing yards.

However, Cornell has been very successful running the ball this season as well. The only player with more rushing yards than Stanton in the Ivy League this season is Cornell’s own Luke Hagy, who will be coming in with a streak of six consecutive 100-yard rushing games. The school record is 10 straight games (Ed Marinaro ’72). Last week against Colgate he ran for 121 yards and an unbelievable 11 yards a carry. Quarterback Robert Somborn also seems to be getting more comfortable with the offense as he has increased his passing yards each game this season including 272 yards last week. Last week was also the first game that he did not throw an interception. The team is hoping he can continue his progression against his toughest test yet.

Cornell’s late game struggles have been well documented so far. They have lost all three games by one possession and had chances to win or tie in each fourth quarter. However, Harvard is unlike any team that Cornell has played so far. If the Big Red find themselves in a similar situation late in Saturday’s game, they must take advantage if they want to pull off a major upset and have a signature win.

This will be the 80th all-time meeting between Cornell and Harvard dating all the way back to 1890. Harvard has had the advantage in this series going 45-32-2. Cornell has not won a game against Harvard since 2005. After last week’s loss, Coach Archer said “we have to put four quarters together and three sides of the ball together.” That statement has never been true than it will be for Saturday’s game.