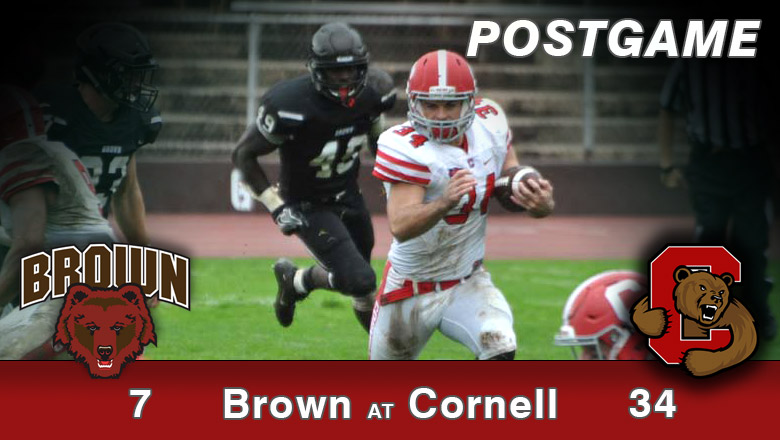 ITHACA, NY. – Cornell football earned its second victory of the season with a 34-7 drubbing against Brown on Saturday, October 21, at Schoellkopf Field. The win left Cornell with a 2-4 overall record, including a 2-1 record in the Ivy League; it’s the first time since their 2000 campaign that the Big Red has played this well against interdivisional opponents. Brown Fell to 2-4 on the year and 0-3 in conference play to remain tied for dead last in the Ivy League with Penn. Cornell had complete control of the game and never let their foot off the gas pedal to help earn a win as they enter the most grueling part of their schedule.

Overall, The Big Red were able to take care of business against a Brown team that had struggled offensively averaging just seven points-per-contest over their last three games. Cornell put up their best offensive performance of the year, racking up 34 points, ten points more than their previous high against Yale back on September 23. Dalton Banks executed for a second-consecutive week, completing 73% of his throws (19/26) for 228 yards and not throwing an interception. The Big Red also received stellar performances from a multitude of running backs. Sophomore Tailback Harold Coles rushed for 65 yards on six carries and scored twice; Chris Walker had 66 yards on 16 touches and a score, and Jack Gellatly rumbled for 74 yards on seven carries and scampered in for a TD. Combined the three halfbacks rushed for 205 yards on 29 carries, averaging an unheard of seven yards per-rush-attempt.

Although the defense came into this game allowing just 20.3 points-per-game over their last three meetings, they took it to another level with their dominating performance against Brown in which they allowed just seven points. After not allowing a single point through the first three-quarters, the Bears were finally able to get some points on the board early in the fourth. Nicholas Duncan connected with freshman tight end Anton Casey on a two-yard route for Brown’s only touchdown.

While this season Cornell has not gotten off to as quick a start as Coach David Archer would’ve liked, they have come full circle over their last two meetings. The Big Red has done two things over their last two matchups that if they can maintain will make them successful the rest of the year. One is they have been multi-dimensional on offense and defense and two has been their ability to finish off plays in the red zone.

This next game will be a true test of how resilient Cornell can be, as they get ready to face some of the best competition in the Ivy League over their next three games, which includes Princeton, Dartmouth, and Columbia. These teams are a combined 16-2 this year. The Big Red’s next matchup will be on the road against Princeton on Saturday, October 28, at Princeton University Stadium. Kickoff is set for 7:00 PM Eastern Time.