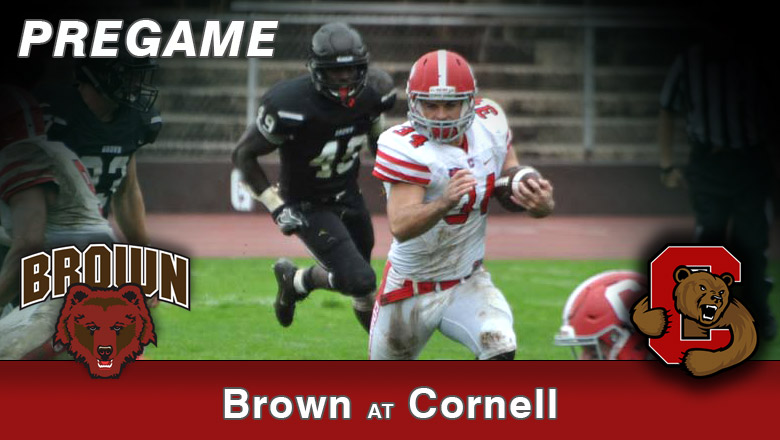 ITHACA, NY. – Cornell will play its sixth game of the season this Saturday, October 21, at 3 PM against Brown at Schoellkopf Field. The Big Red, who is coming off its fourth loss of the year against Bucknell, is 1-4 this season with a 1-1 record in Ivy League play. Meanwhile, Brown has struggled to get going at 2-3 and is tied for last in conference play with Penn at 0-2. The Big Red, on the other hand, is tied for third with Yale, Princeton, and Harvard, who are all 1-1 in their Ivy League matchups. The Big Red will have the opportunity to end Brown’s nine-game winning streak and take over sole possession of third place in the Ivy League Standings.

Cornell will be coming into Saturday’s game having taken a step back from their performance last week against Harvard with a 26-18 loss to Bucknell this past weekend. The Big Red will be looking to improve to 2-1 in Ivy League play for the first time since their 2000 campaign. The key to Cornell’s recent success has been their improvement on the defensive side of the ball. The unit has given up its fair share of points this year, but over its last two matchups, the defense has allowed just 20 points-per-contest.

However, Brown is coming into this meeting having struggled mightily on the offensive side of the ball. Over their last two games, Brown has scored just 13 points and has allowed their foe to score an average of 35 points-per-matchup over those two meetings. Quarterback Jeffrey Jonke hasn’t played well tossing for 203 yards and a touchdown while also throwing two interceptions in their past two contests. Their biggest weapon has been freshman running back Darius Daies, who in the three games he has played this season has rushed for 177 total yards with three touchdowns. Cornell will need to defensively take him out of the game and make someone else beat them.

While Cornell’s defense has improved over their last two games, they are still not as consistent as Coach David Archer wants them to be. Prior to their loss to Bucknell, they earned their first win of the year by holding Harvard, a perennial powerhouse to just 14 points, only to give up 26 points against the Bison the following week, and earn another disappointing loss.

Saturday will be the 65th meeting between these two teams dating back to 1895. Brown holds the advantage in the series going 37-26-1 in those games.