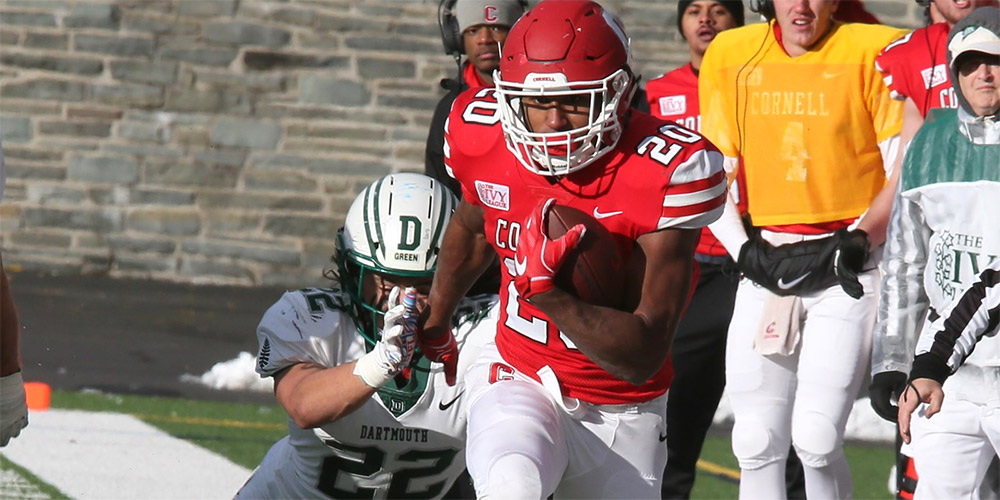 ITHACA, N.Y. – The football team strung together three scoring drives in the second quarter to put a dent in one of the Ivy League's top defenses, but No. 23 Dartmouth pulled away with a pair of 1-yard rushing touchdowns by Jared Gerbino after the half for a 35-24 victory on Saturday afternoon at Schoellkopf Field. The Big Green improved to 8-1 (5-1 Ivy) with the victory, while the Big Red fell to 3-6 (2-4 Ivy).

On Senior Day, Dalton Banks was 28-for-40 passing for 263 yards and two touchdowns for the Big Red, with Owen Peters, Harold Coles and Lars Pederson hauling in five receptions apiece. Banks also led Cornell with 58 yards rushing, and Coles added 45 on nine carries. The 24 points by Cornell (3-6, 2-4 Ivy League) were the most surrendered this season by Dartmouth (8-1, 5-1).

Defensively, Lance Blass had a career-high 15 tackles and intercepted a pass, as did senior DJ Woullard in his final home game. Jelani Taylor had 11 tackles, all in the second half after missing the first 30 minutes due to a targeting call the previous weekend.

On a blustery day where attacking the field's south end zone proved favorable, Dartmouth used that to its advantage early on. The Big Green soared to a 21-0 lead in the first quarter, then called a timeout in the dying seconds to seemingly force one last punt into the wind by Cornell.

Only the Big Red refused. The hosts' first of three fourth-down conversions on the day served as a catalyst for a scoring drive capped by Harold Coles' 7-yard touchdown run. Zach Mays would hit a career-long field goal of 43 yards a little later, then Coles' 21-yard catch-and-run into the end zone with 54 seconds before half cut the Big Red's deficit to 21-17.

But Dartmouth regrouped at the half. After a 13-play scoring drive to open the third quarter, the Big Green later scored again after a fumble recovery at the Cornell 11-yard line to build the lead back up to 35-17. After making a spectacular one-handed grab earlier in the drive, Pedersen scored the Big Red's last touchdown late in the fourth.

Nigel Alexander (14) and David Emanuels (11) each posted career highs in tackles for the Big Green, while Jake Moen had seven total stops, including 2.5 for a loss and 1.5 sacks. Gerbino led Dartmouth with 106 rushing yards and two touchdowns, while Derek Kyler connected on 12-of-20 passes for 167 yards and a pair of scores.