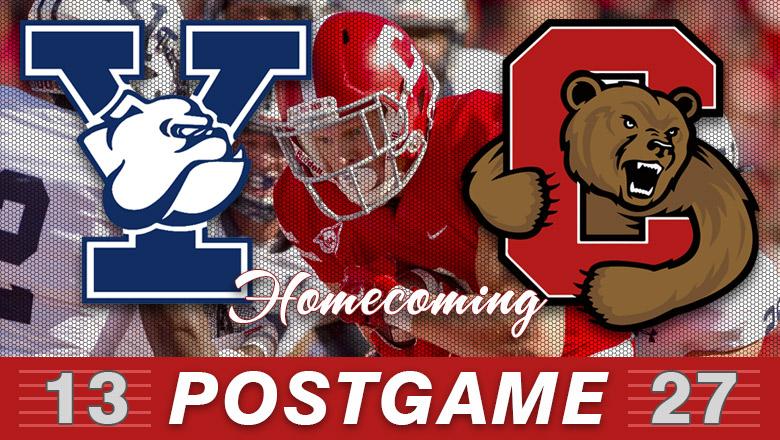 There were many occasions to celebrate on Cornell’s Homecoming 2016. The pregame Kite Hill parking lot was jammed with the CFA tent overflowing with excited alumni talking about the recent fortunes of the Big Red.

Nearly 16,000 fans decorated the Crescent with a hue of red, and they enjoyed every minute of the terrific show put on by the local gridders, as their record is now 2-0 for the first time since 2009.

For the second week in a row, both the offense and defense shined, but it was the latter that really provided the spark during the early going. Cornell jumped out to a 14-0 lead. Junior safety Nick Gesualdi broke up a third-down Yale pass to ignite the Red’s first scoring drive. Sophomore quarterback Dalton Banks marched his charges 60 yards in just under 3 minutes, and the drive ended with a 1-yard run by sophomore J.D. PicKell for his first collegiate touchdown.

Yale thwarted Cornell’s running attack by loading the box, but with Head Coach David Archer ably calling the plays, Archer elected to put the ball in the air with Banks completing 22 of 31 passes for 297 yards of which 235 came before halftime. For the entire game, Banks teamed up with 12 different receivers.

Gesualdi set up the second TD with his sixth career interception on Yale’s second possession and returned the ball to the visitors’ 38. Four plays later, Banks found senior wideout Marshall Deutz in the end zone for a 10-yard scoring play.

Early in the second quarter, Yale kicked a 38-yard field goal, but a minute later senior wideout Ben Rogers turned a spectacular catch in the end zone into a 43-yard TD to give the Red a 21-3 margin.

Sophomore Zach Mays, last week’s Ivy League Special Teams Player of the Week, converted a 37-yard field goal just before the first half ended to send the Red into the locker room leading, 24-3. As he was at Bucknell, Mays was perfect for the day with two FGs, three extra points, and booting four of his five kickoffs for touch-backs. “He is a huge weapon,” said Coach Archer. “Just to be able to keep putting points on the board when a drive stalls in the red zone is enormous.”

The only scoring in the third quarter was a 3-yard run by Yale at 10:08. Mays’ 28-yard field goal upped the score to 27-10 in the fourth quarter before the Elis 23-yard three-pointer with 4:34 remaining in the game.

Senior linebacker Jackson Weber had a career day, including sparking the team’s pregame talk. The 6-2, 229-pounder led the defense with 11 tackles, a pass break-up and an interception that put the victory on ice.

“It was just a beautiful day,” said Coach Archer. “These kids are unbelievably resilient. They beat a good team today, and the fun part is it’s not like we’ve played our best. There are some things to improve and work on. It’s just a day to celebrate our football program.”

Next up for the Big Red is a trip to Hamilton, NY, to face the Raiders of Colgate.