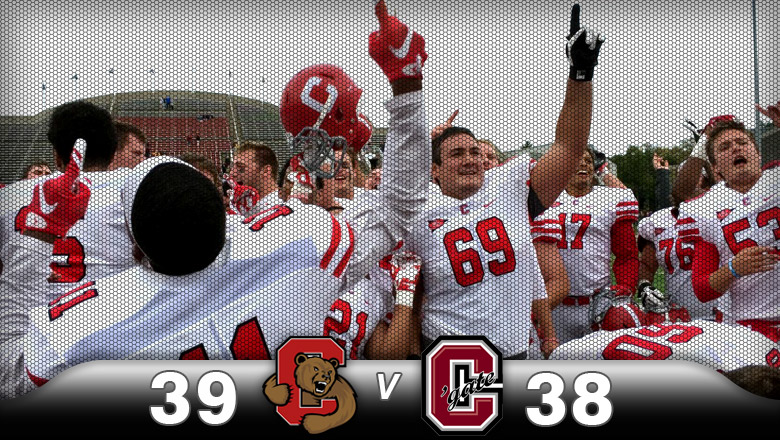 Coach David Archer treated the 39-38 upset win over 25th-ranked Colgate on Saturday with aplomb. He simply said, “We stuck to it, and they just kept making plays. It was just a day I’ll never forget.”

Many other Big Red fans won’t forget it either. The last time the local gridders defeated a nationally-ranked team was in 2006 when the Red beat No. 15 Princeton, 14-7, at Schoellkopf Field. The last road victory over a top 25 team was way back in 1950, a 13-6 triumph at Penn.

Late in the fourth quarter, with the Red trailing 38-33, the defense made a stop near mid-field. Five plays (3×4 pass completions, 1 rush) advanced the ball to the Colgate 19-yard line. On first down, sophomore quarterback Dalton Banks lofted a pass into the right corner of the end zone. BONANZA! Senior wide receiver Colin Shaw, with a defender draped on his back, caught the ball over his shoulder, dragged his foot in the turf before hitting the white line and it was six points, Big Red, but not before an officials’ review that took longer than the six-play drive. The two-point conversion run by sophomore Chris Walker was stopped, but Cornell had its first lead of the game with 28 seconds to play.

Colgate took the ball back and immediately advanced 30 yards on a pass reception to the Cornell 48. Three straight incomplete passes, including deflections by juniors lineman Geno DeMarco and strong safety Nick Gesualdi on the final two plays made the Big Red 3-0 for the first time since 2006.

The Raiders took a 21-0 lead in the first quarter and the Homecoming crowd was enjoying itself too much. A big play that sort of went unnoticed came early in the second quarter. After senior punter Chris Fraser pinned Colgate at its own 4, the Raiders tried two incomplete passes. Junior linebacker Kurt Frimel, on third down, tackled quarterback Jake Melville in the end zone for a 2-point safety that produced the game-winning margin.

After the safety, Cornell tacked on a 29-yard field goal by sophomore Zach Mays. The home team then sandwiched a touchdown pass and a last-second field goal around Shaw’s first touchdown, a 70-yard aerial from Banks. Shaw caught the ball and just out-legged the defenders for the TD. The halftime score was Colgate 31, Cornell 12.

Banks scored early in the third quarter on a 5-yard run that took five plays to go 62 yards, but Colgate answered back with its own 78-yard scoring march. The Big Red then scored 14 points in the last 3 minutes of the quarter. Walker, who had 110 yards rushing on 13 carries, set up the next score with a 47-yard run. On third down, Banks threw 21 yards to TE Nick Bland for the senior’s first collegiate touchdown.

With 13 seconds remaining in the third period, junior wide receiver James Hubbard found himself on the end of a 63-yard TD pass from Banks. On the play, the pass was originally tipped 10 yards off the line of scrimmage and it went up in the air behind the defenders. Hubbard found himself all alone, except for the errant aerial, and he raced to the end zone to cut the deficit to five points, 38-33.

“I was thinking. It’s about time, said Coach Archer of Hubbard’s grab. “When you work hard, you get lucky and you get breaks. These kids in the program deserved that one.”

Statistically, Banks completed 25 of 45 passes for 454 yards and four touchdowns. He was also intercepted three times, his first misfires of the season. Hubbard caught five passes for 105 yards and Shaw grabbed two for 89 yards. Ten different receivers were on the end of Banks’ aerials.

Between the two teams, there was 1,164 yards of total offense with the Raiders recording just 30 more than the Big Red.

Senior safety Justin Solomon had a career-high 15 tackles, while Frimel and sophomore cornerback DJ Woullard each had 10 stops.

This coming Saturday it is the battle of the unbeaten in Allston, MA. Harvard and Cornell are the only undefeated teams left in the Ivy League. A large Big Red contingent is expected to be in attendance to cheer its alma mater on to victory.