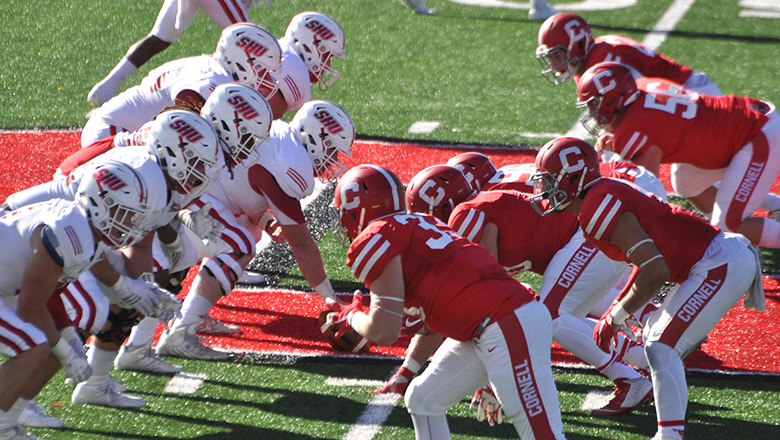 The Big Red trailed 31-10 midway through the third quarter. Most teams in that situation would have packed it in at that point—especially given that the Red was playing a team that it had lost to by 25 points a year ago. It’s been clear all season long that this Cornell team is different.

“We’ve done a really good job of keeping our heads up and understanding that it’s not over until the whistle blows,” junior safety Gesualdi told the Cornell Sun. “We know we can come back.”

The momentum changed on the big-play ability of the Big Red defense, starting late in the third quarter. Sophomore Ryan Kelley’s interception on a down play gave Cornell the ball on the Sacred Heart’s 8-yard line and led to the first touchdown in the rally. Then it was Gesualdi’s turn on the next possession, picking off a pass after the kickoff unit trapped the Pioneers inside their 10-yard line early in the final period. And senior safety Justin Solomon made it three interceptions in three straight possessions. His pickoff at midfield set up Banks’ one-yard TD to pull Cornell within 31-24 with 8:54 to play.

“I’m very proud of how the secondary has been playing,” Gesualdi was quoted in the Cornell Sun. “We are being way more locked down this year than we have been in the past years. It’s opening up a lot of opportunities for people to get interceptions.”

Unfortunately, the Red just dug itself too deep a hole. Still, it had two chances to tie the game in the final 4:18 after one again stopping the Pioneers on their next possession. But the offense went three-and-out on the first of the two opportunities. Cornell had one more chance, taking over at its own 39 with 48 seconds remaining. Banks just missed on a big play to senior receiver on third down and four. A defensive holding penalty on fourth down gave the offense one more shot with under 10- seconds to play. But Sacred Heart was able to grab an interception on a tipped pass near the Pioneer end zone, ending the comeback attempt.

“It shows we’re resilient… We’re always gonna fight back, but it was a bummer,” Banks told the Sun. “Things weren’t going our way and we got behind way too early. We got close and took a few shots in the end, but it just didn’t fall our way this week.”