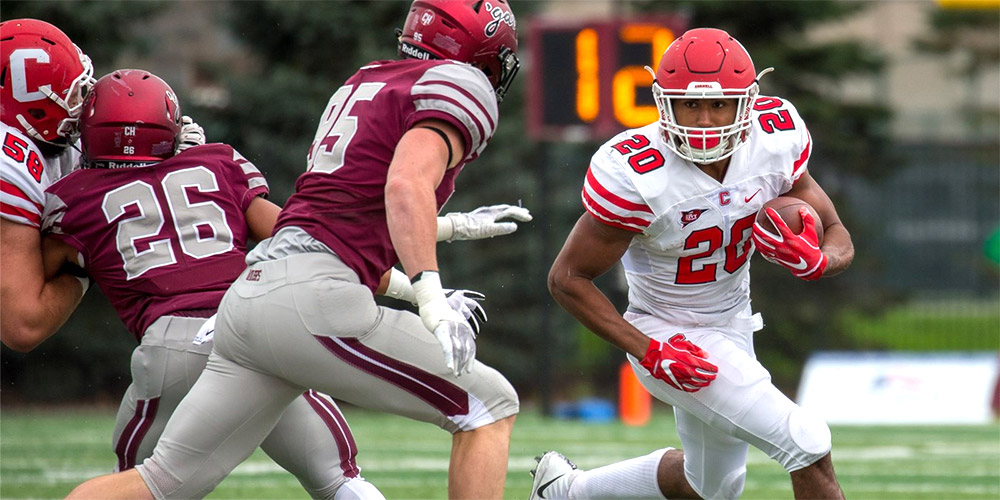 HAMILTON, N.Y. -- The 100th all-time meeting between Cornell and Colgate was dominated by the Raiders' top-ranked defense, as the home team posted its third shutout in four games with a 31-0 victory on Saturday afternoon at Andy Kerr Stadium. No. 17 Colgate improved to 6-0, while the Big Red fell to 2-3.

Colgate, which has allowed just six points in its last five contests and 23 points all season, defended in the red zone just once, allowed only 252 total yards and limited the Big Red to 4-of-16 on third downs and 2-of-7 on fourth downs. It also forced three turnovers against a Cornell offense that had committed just one total in its first four games.

T.J. Holl had a game-high 18 tackles, including two for a loss, and blocked a Big Red field goal attempt at the end of the first half that kept the visitors off the board. In all, Colgate had nine tackles for loss and intercepted three passes, including one by Tyler Castillo that was brought back 58 yards for a touchdown.

Cornell's defense kept it in the game much of the afternoon, with Jelani Taylor leading the way with 10 tackles, a forced fumble and a pass breakup. Mason Banbury forced and recovered a fumble. The Big Red allowed only three drives of more than 40 yards on the day.

The Big Red rushed for 136 yards against a Raiders' defense that hadn't allowed more than 73 in its last four games as Colgate won its 11th consecutive contest dating back to last year. Harold Coles led the Big Red rushing attack with 46 yards on 14 carries, while Jake Derderian, J.D. PicKell and Delonte Harrell combined for 74 yards on 21 carries. Owen Peters caught four passes for 56 yards, while Dalton Banks completed 14-of-25 passes for 91 yards.