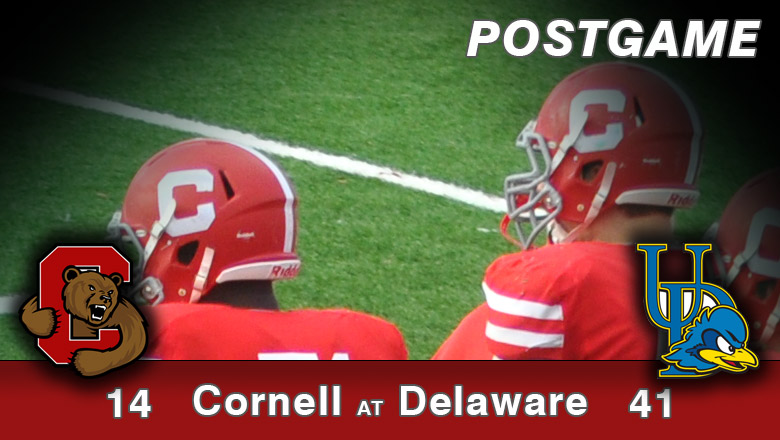 NEWARK, DEL. – Cornell began the season with a 41-14 loss to the University of Delaware on Sunday afternoon at Delaware Stadium. The defeat left Cornell with a 0-1 record to begin the year, while Delaware improved to 2-1. For the Blue Hens it was a rebound effort, following their 27-0 loss to the Virginia Tech Hokies, a team that lost in the ACC Championship Game to the Clemson Tigers last year, but went on to win a Bowl game by defeating the Arkansas Razorbacks 35-24. Cornell trailed by multiple possessions for most of the game but made a few plays late to avoid being shutout. However, Delaware had answers for every comeback attempt to hold onto a sizeable lead.

Overall, the Big Red played well considering the caliber of opponent it was up against. The offense put up a fight late in the game after struggling in the first two quarters. Quarterback Dalton Banks threw for 247 yards and a touchdown; he did however, throw three interceptions. Banks biggest play came late in the third quarter, when he connected on a 27-yard pass play with wideout Eric Gallman with 8:14 left to go. It was the first sign of life from a Big Red offense that was limited to just 118 total first-half yards. The Big Red’s only other scoring play came on a Josh Sweet two-yard run to cap-off an 11 play, 77-yard drive that took four minutes and 32 seconds off the clock and allowed Cornell to end the game with some momentum.

Although the defense gave up 41 points, it played significantly better in the second- half against a team that is averaging 31.5 points-per-game so far this year. After giving up 27 points in the first half, the Big Red defense honed in to give up just 14 points in the final two quarters. The defense also managed to pick off Delaware quarterback Joe Walker, something that teams have had success with early on. Walker came in with two interceptions, having thrown one in each of his first two games, but senior inside linebacker Daniel Crochet picked him off for his third interception in his last three games. Walker threw for 202 yards and two touchdowns. One of those touchdowns was caught by wide receiver Jamie Jarmon, who finished with 8 receptions for 84 yards, and the other by wideout Charles Scarff, who had two receptions for 12 yards and a TD. Running back Kareem Williams also got in on the action, rumbling for 121 yards on 15 carries, averaging 8.1 yards-per-rush attempt.

While this may not have been the way coach Archer and his team wanted to start the season, the Big Red did show flashes of potential throughout the game. Cornell will look to come out attacking when it faces one of their biggest rivals, Yale University (1-0), on Saturday, September 23, at 1:00 PM ET at the Yale Bowl.