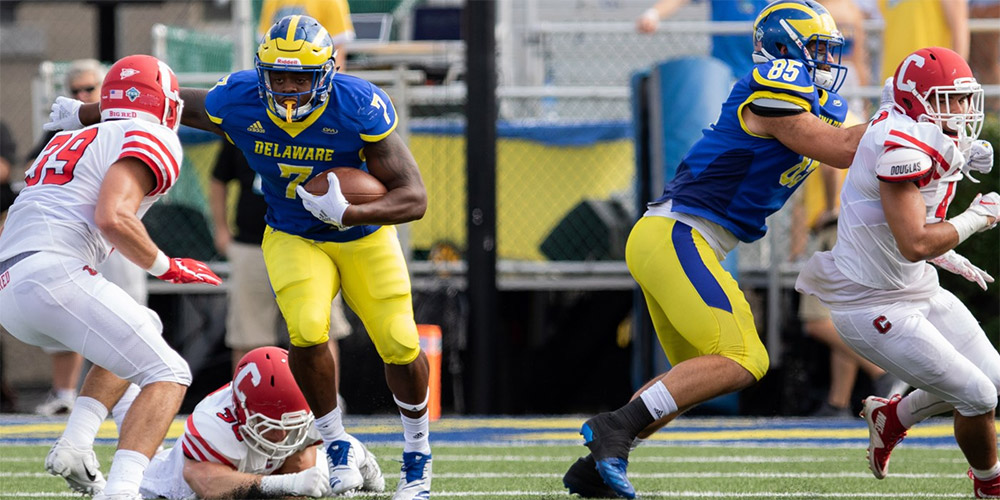 NEWARK, Del. -- Delaware's defense limited Cornell to 232 yards of offense and improved to 2-1 on the season with a 27-10 win on Saturday afternoon at Delaware Stadium. The loss ruined the Big Red's 2018 season opener.

Junior quarterback Mike Catanese connected with classmate Davy Lizana in the right corner of the end zone in the game's final minute after Nickolas Null opened the scoring with a field goal in the first quarter, but in between the Blue Hens stifled the Big Red offense and was opportunistic against its defense. Blue Hen quarterback Pat Kehoe was just 14-of-29 passing, but was credited with 254 yards. His favorite target, Joe Walker, hauled in six passes for 154 yards, making him the first Delaware player in school history to register games of 100 yards rushing and receiving and 200 yards passing in a career.

The Big Red defense kept the visitors in the game nearly the entire way, limiting Delaware to 14 points in the first three quarters. Phazione McClurge and Jelani Taylor each were credited with a team-high seven tackles, while fellow defensive back David Jones broke up a pair of passes.

Unlike a year ago when the Big Red fumbled on its first offensive play and ultimately trailed 34-0, Cornell took the ball and scored on a textbook 13-play, 64-yard drive that ended with a 28-yard Nickolas Null chip-shot field goal six minutes into the game.

The defense forced three-and-outs on Delaware's first two possessions, but the combination of Kehoe and Walker was able to stretch the field. The twosome combined for four connections for 103 yards. Included was the go-ahead 14-yard touchdown on the final play of the first quarter and a 42-yard hookup that set up the Blue Hen's second score. By the break, Delaware led 14-3.

Cornell used three quarterbacks, seven running backs and had 13 different offensive players with a touch in the first 30 minutes.

After a scoreless third, Delaware took control in the final 15 minutes. A 3-yard Kani Kane touchdown run capped a 12-play, 69-yard scoring drive that took 7:41 off the game clock and took much of the wind out of the visitor's sails. The Big Red didn't fold, going for it on fourth down past midfield on a fourth quarter possession before finally getting back on the board with 26 seconds remaining on Lizana's impressive grab on a tough throw by Catanese.