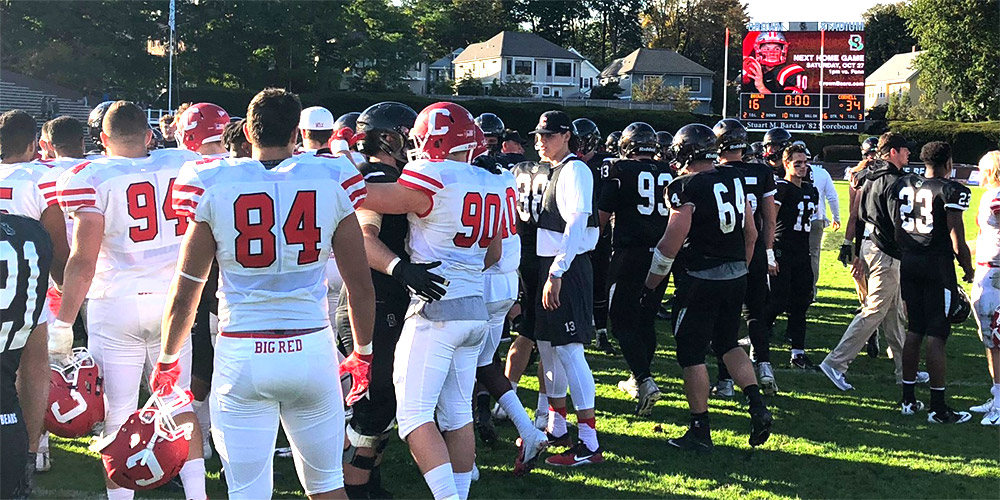 It was a true team effort as the Big Red claimed consecutive wins over the Bears for the first time since 1993 - before any member of the current roster was born. Cornell piled up 498 yards of offense and scored 34 straight points, the defense had four sacks, forced a fumble and broke up five passes while keeping the Bears off the scoreboard on four consecutive pivotal possessions, and special teams blocked a field goal and allowed just 15 total return yards.

Senior quarterback Dalton Banks completed 19-of-26 passes for 265 yards and three touchdowns, Harold Coles gained 141 yards on the ground and scored once on the ground and another t ime through the air, and Lars Pedersen had three catches for 100 yards and a touchdown to pace the offense. Owen Peters and J.D. PicKell also reached the end zone. Defensively, Lance Blass had seven tackles, including 2.5 for a loss and 1.5 sacks, Jelani Taylor had eight stops and David Jones made a pair of pass breakups and blocked a kick.

Cornell dominated time of possession (33:51-26:09), recovering from an early blow with two late touchdowns in the second quarter and a backbreaker to start the second half. Brown's fortunes turned on a dime, going from up 10-0 to down 21-10 in less than seven minutes of game time.

LJ Harriott had 142 all-purpose yards for Brown, including a 65-yard run to make it 10-0 Bears with just 6:44 left in the first half. Two of his plays - the long run and a 56-yard reception - made up 121 of Brown's 379 yards on the day. From the time Harriott crossed the goal line until the final horn, Cornell dominated.

It started with an eight-play, 74-yard drive that got the visitors on the board. After completing an earlier third down, Cornell went four it on fourth down with the perfect call, with Banks hitting Coles on the jailbreak screen. The junior did the rest of the work, going 27 yards to paydirt. After the defense got a stop, Cornell marched 61 yards in just 67 seconds, with the big play coming on a 27-yard connection from Banks to Pedersen down to the 27. Facing second-and-goal from the 1 and just 12 seconds before halftime, Banks hit a crossing Owen Peters to send the Big Red into the break with a 14-10 edge.

Cornell made it 21-10, then 28-10 and 34-10 before the Bears scored a meaningless touchdown with 2:42 left. The Big Red sniffed out the two-point conversion and got the stop to seal the final score.

Up 21-10 in the third, Cornell made one of the biggest hidden plays of the game. After Brown misplayed a kickoff and started an offensive drive at its own 1, the Bears marched down the field before being slowed in the red zone. Brown settled for a 22-yard field goal attempt that would have cut it to a single-score game, but David Jones was able to block the kick and

Hometown hero Jake Derderian, from nearby Warwick, ran for 71 yards on 11 carries and soft-spoken senior Victory Olapinsin, who gave the senior speech on Friday evening to motivate his teammates, had his first career sack.