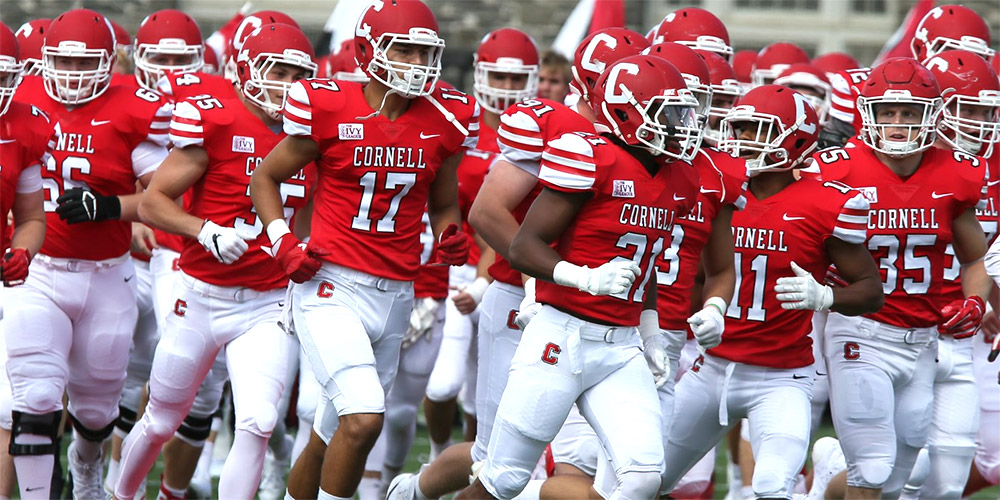 PRINCETON, N.J. -- The unbeaten, nationally-ranked Tigers turned nearly every Cornell mistake into points and made a rainy, blustery day that much worse in a 66-0 win over the Big Red on Saturday afternoon at Princeton Stadium. No. 17 Princeton moved to 7-0 (4-1 Ivy), while the Big Red slipped to 3-4 (2-2 Ivy).

The Tigers jumped out to a 45-0 halftime lead, taking advantage of three early Cornell turnovers and a blocked punt to pile up 333 yards of offense at the break. The nation's top-ranked scoring offense scored six touchdowns - all less than 3 yards - and rolled to victory in a series that otherwise had been decided by a field goal or less 14 times in the last 28 years. The Princeton offense, which entered the game scoring 48 points per outing, converted on seven straight series to end the first half . Of Princeton's 10 scoring drives, only one was greater than 57 yards. The home team's average starting field position was midfield.

Junior David Jones had his seventh career interception, while senior Reis Seggebruch had a game-high eight stops. Senior Mason Banbury had seven tackles and junior Jelani Taylor notched six. Junior Harold Coles became the 30th Cornellian to surpass 1,000 career rushing yards. He ended the afternoon with career 1,010 yards, while freshman Delonte Harrell led the way for the offense with 42 rushing yards on 12 carries. In all, the Big Red posted 139 rushing yards against a Princeton defense that ranked 11th nationally, allowing just 97 yards each contest. In all, 10 different receivers had at least one catch from quarterbacks Dalton Banks (8-of-18, 70 yards, four interceptions) and Richie Kenney (5-of-11, 134 yards).

Charlie Volker had three touchdown runs and quarterback John Lovett had 192 yards of total offense and was responsible for a pair of touchdowns. Lovett ran for 159 yards and a touchdown and threw for 133 more and a score. Seven different Tigers scored a touchdown. TJ Floyd led the defense with two interceptions and Anthony Siragusa had a team-best seven tackles, including 1.5 for a loss.