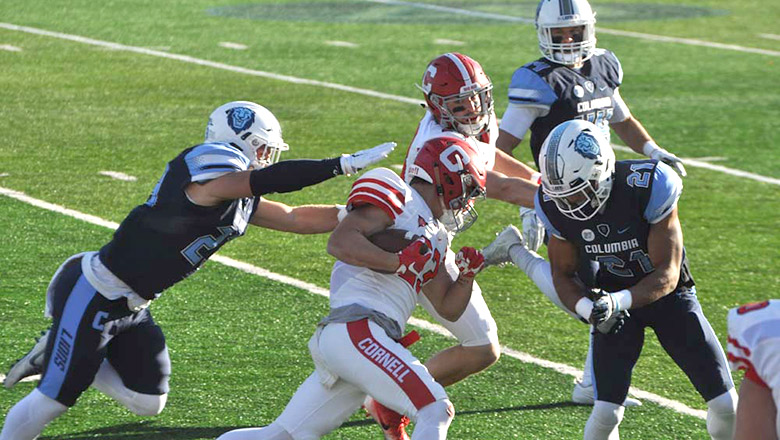 The Cornell Daily Sun of November 25, 1889 led its account of Cornell’s first Columbia game as “a hard game with little slugging and no injuries.” It estimated the crowd at Columbia as “about 400 persons.” It added that “The day was perfect and the field for the most part in good condition.” Columbia, it said, “gained ground several times by kicking and once had the ball within five yards of Cornell’s goal.” The final score: Cornell 20, Columbia 0 in a 7-2 year in which Cornell mashed Michigan 66-0 and Bucknell 66-0. That made Cornell state champions, the Sun said. Daniel Upton and Louis Ehle ran for touchdowns. John McDowell kicked two goals Win Osgood, a super center, rang up two, once pushed over the line the line by a hard rush. That helped him make several long gains. The game was called at 5:05 when it was almost too dark to play. Cornell outscored opponents 354-130 that third year of play with five shutouts, including a 124-0 Rochester rampage.

It besmirched the pride of the Lions, 36-0, the next year, which did not field a team from 1892-1898. Football was banned at Columbia from 1906-14. In 1905, a heavy toll of players died of football injuries and President Teddy Roosevelt demanded that the game be made less brutal. In response, rules were made to open the game. Forward passing was made legal. New rules stationed linemen in the backfield and a neutral zone between offense and defense was established to reduce the roughness that had resulted when linemen lined up chest-to-chest before the ball was snapped.

In the ensuing 11 years, Columbia won six, lost two and tied three. In 1930, Luigi (Lou Little) Piccolo became Columbia coach. He began a streak of winning seasons immediately. His Lions downed Cornell 9-6 in 1933, the season they played Stanford in the Rose Bowl. The Pasadena field was wet that day but Stanford managed many long gains early. The wet ball slipped out of the gridders’ grips more than once. Nevertheless, Columbia tried Little’s secret KF-79 reverse in the second quarter. It was stopped. Later, Columbia passed its way to the Stanford 17 and QB Cliff Montgomery called KF-79 again. He handed off to fullback Al Barabas who drifted left as Montgomery faked another handoff. Barabas then hustled around left end to cross the last stripe. The rain poured on to the finish but KF-79 produced the day’s only points. 7-0 Columbia.

Sid Luckman’s 1938 Columbia team beat Yale, Virginia, and Army in a 3-6 season. Army led 18-13 at the half. Luckman marched his Lions past the cadets into the end zone with two minutes left. Final: 20-18. Chicago Bears owner and Coach George Halas was there. He liked what he saw. So Lion Luckman became a Bear and the first great pro T with a man in motion formation QB. There are those who are still haunted by the memory of the last-minute long Halloween TD aerial Columbia’s Paul Governali unloaded to Otto Apel. It gave Columbia a 14-13 win over Cornell in 1942. Another Army team came to Columbia’s Baker Field in 1947 (without Doc Blanchard and Glenn Davis, the TD Twins who had been instrumental in the 32-win streak Army brought with it). Columbia had twins too — Gold Dust Twins QB Gene Rossides and HB Lou Kusserow. West Point led 20-7 at halftime and 20-14 into the last quarter. That’s when Rossides launched the pass that a low-flying end Bill Swiacki snagged in the end zone in a classic photo. Kusserow scored two TDs that day and made a game-saving interception on the last play of the game, so the score stood: Columbia 21, Army 20.

True Columbia blue William V. Campbell ’62, aka Bill or the Coach of Silicon Valley, Apple chairman and management guru to tech titans, came to Morningside Heights from the steel town of Homestead, PA. A fierce 170-pound linebacker and offensive guard, he was captain of the ’61 Lions, who followed a 30-20 loss to Princeton with five Ivy victories and Columbia’s only Ivy title — so far — which it shared with Harvard. He was a six-year coach of the Lions before proceeding to his business championships in a too-short life.

Quarterbacks Archie Roberts of Columbia and Gary Wood of Cornell kept knuckles white in the stands and elsewhere in the early Sixties. For instance, in a muddy Lions’ lair in ’62, Cornell held a 21-19 edge with 19 seconds left on the clock. Under pressure as he dropped back to pass, Roberts fell but on the way down he flipped the ball to Al Butts who gathered in the pigskin and lugged it 24 yards for the TD that made it Columbia’s day, 25-21. The next year, in Ithaca, Wood, down 17-10 with 2:55 left, passed and ran the team 65 yards to the one. He took it in before pitching out of the option to Bob Baker, who took it for a two-point after conversion and an 18-17 win with 14 seconds on the board. It was one of several shining Wood-finishes with less than a minute to go. Woody went on to five pro years with the Giants, New Orleans and Ottawa’s Rough Riders. Roberts got looks from Cleveland and Miami before years as a cardiothoracic surgeon. He performed more than 4,000 open heart surgeries, trained dozens of young doctors in cardiothoracic surgery and wrote acclaimed books on the subject.

Ed Marinaro passed Oklahoma’s Steve Owens’ career rushing yards mark of 3,867 — set two years earlier — in the Big Red’s Big Ed’s 24th game, vs. Columbia at Schoellkopf on October 30, 1971. Ivy laurels were at stake. Marinaro ran the ball nine of 10 consecutive times and 10 of 11 downs in a late drive that set up John Killian’s 37-yard field goal which gave Cornell a 24-21 win and a share of the Ivy title with Dartmouth. Marinaro gained 272 yards that day. He finished his Cornell years with 4,715 yards as first collegian to rush for 4,000 or more. He wound up second to Auburn QB Pat Sullivan for the Heisman Trophy but won the Maxwell.

Behind 26-7 with 9:33 to play, Jim Knowles’ 2004 Big Redders did the barely believable at Baker Field. Sean Nassoiy made two fourth quarter interceptions and QB D.J, Busch made two TD passes, including the decider, with 37 seconds left in a 32-26 victory that made history.

Cornell and Columbia both scored in all quarters at Baker Field last November and the Empire Bowl winner was decided. Both made TDs in the first quarter. It was Columbia 24, Cornell 17 at the half and Columbia 27, Cornell 28 at the three-quarter mark. QB Dalton Banks’ one-yard TD pushed the Red ahead, 35-27. Chris Walker’s 71-yard dash plus Nickolas Null’s PAT added up to 42-33 with 4:53 to go. Columbia tacked on seven more points with under two minutes left. It stood at 42-40 before the traditional Fifth Ave. stroll to the Cornell Club.