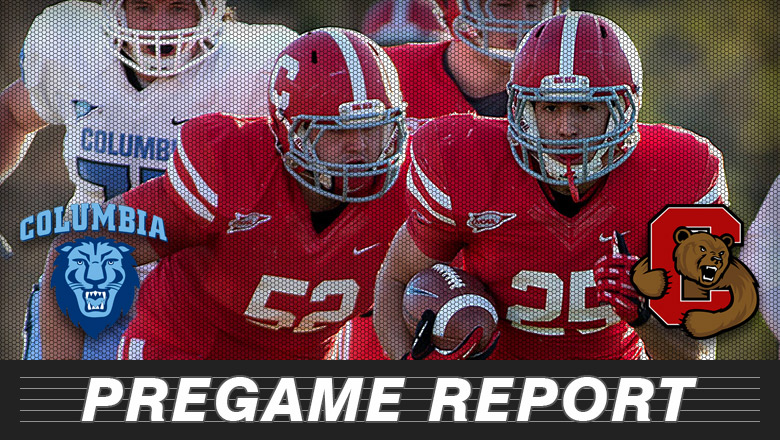 1889 was a good year, as the Big Red football team beat Columbia, 20-0, in the first meeting between the two schools.

2016 could be a good year too, as Cornell travels to New York City to face the Lions for the 104th time, leading the series, 64-36-3. A win over Columbia in 2016 would make the Red 3-2 on the road, giving Cornell its first winning road mark since going 3-2 in 1994. With one game to go after this Saturday, a victory would make the 2016 slate 4-5, doubling the combined win totals from the past two seasons.

The Empire State Bowl—started by a couple of stouthearted alumni, Buck Briggs and Howie Borkan, way back when I was still the sports information director at Cornell. Officially, it took its name in 2010, and the Big Red leads the recent series, 4-2, and has won three straight to claim the lead. The trophy currently resides in Ithaca after last year’s exciting 3-0 triumph at Schoellkopf Field.

Making it four straight Empire State Bowl victories in a row will be a challenge playing at Wein Stadium at 1 p.m. on Saturday. Columbia brings a deceptive 2-6 record into the game, after dropping a 28-21 decision to Ivy League unbeaten Harvard last weekend. The Lions have lost two in a row since a 9-7 win over Dartmouth on its Homecoming on Oct. 22.

Columbia has mirrored some of Cornell’s problems this year by starting games slowly. The Lions have been outscored 115-29 in the first half this season. Defense has been their forte, allowing just 345.8 yards per outing. Senior Gianmarco Rhea, a 6-2, 235-pound linebacker, is among the Ivy leaders in tackles (1st, 88), tackles for a loss (2nd, 13.0) and sacks (6th, 5.0).

The Columbia offense averages just 285.5 yards per contest. Senior Alan Watson, a 5-9, 185-pound running back, leads the ground attack with 364 yards. Junior Anders Hill, a 6-4, 215-pound quarterback, has 1,145 passing yards and five touchdowns, while junior Skyler Mornhinweg, a 6-3, 220-pound signal caller, has recorded 256 yards and two TDs through the air.

The game will feature a battle between two All-Ivy League punters. Columbia senior Cameron Nizialek is averaging 44.0 yards per boot. This statistic is a bit misleading because all of the short punting has been done by senior Matthew Panton. Nizialek can really let it all hang out.

Cornell senior Chris Fraser, a three-time All-Ivy first-team punter, has averaged at least 40 yards per kick in 23 of his last 24 games. And just as important, he has pinned the opposition inside the 20-yard line in his last 36 punts covering six games.

To win the Empire Bowl Cup battle, the Big Red needs to dominate possession time as it did last week vs. Dartmouth. BUT the team must puncture the goal line when it gets in the red zone. And a fast start wouldn’t be bad either.

The ground game has to up the total of 49 yards on 20 carries that it recorded last Saturday. The men in the trenches have to do a better job to allow the team’s leading rusher, sophomore Chris Walker, to get in motion. Walker has 429 yards on 88 carries, while the second-leading rusher is sophomore quarterback Dalton Banks with just 146 yards. The Red is averaging just 110 yards rushing per game.

Banks has done well in the passing department with 173 completions in 298 attempts for 1,925 yards and 14 touchdowns. A pair of seniors are 1-2 in the receiving corps, with wideout Marshall Deutz grabbing 32 balls for 305 yards and two touchdowns, and tight end Matt Sullivan with 27 catches for 275 yards and a pair of scores.

The game is an important one for so many reasons, and Head Coach David Archer continues to praise his athletes. He said, “These are tough kids and they compete so hard, not only in games but all week in practice. It’s hard to win games in the Ivy League, and this week will be another challenge. But one thing we found out last week is that you must score touchdowns; not field goals.”

A win on Saturday would propel the Big Red into its final home game on Nov. 19 vs. Penn, which is 5-1 in the Ivy League going into Friday night’s (8 PM on TV) showdown with Harvard in Philadelphia.