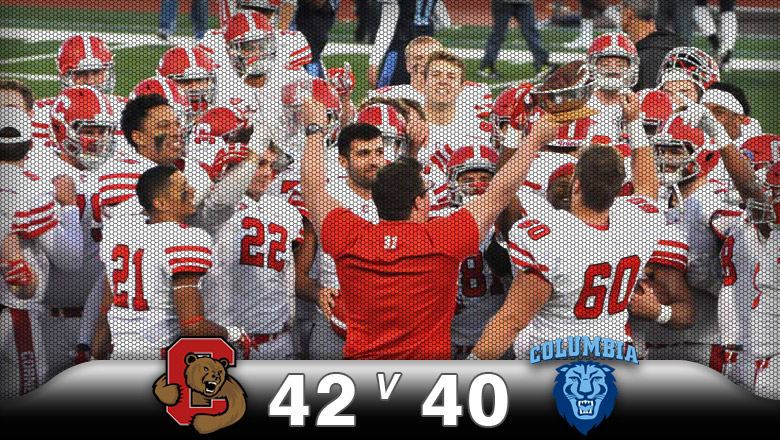 2015: 3-0; 2016: 42-40. Those were the scores of the last two meetings between the Big Red and Columbia with the former winning both games to keep the Empire State Bowl on the Cornell campus for the fourth straight year.

While last year’s game had fans wondering if anyone was going to cross the goal line, the 2016 version had the same people thinking, “Can we hold them to 40 points?”

It was definitely a team victory. There were many explosive offensive plays, and the defense did its part in securing the win down the wire.

There were many big plays, but the most unlikely one came with the Big Red trailing by three points early in the third quarter near midfield. All season long, Cornell had been practicing a fake punt play, and Coach David Archer and Special Teams Coach Guido Falbo made the decision to put the practice to play.

Senior All-American punter Chris Fraser entered the game on fourth down and five, along with backup quarterback Jake Jatis. Instead of Fraser punting, Jatis took the snap and found Fraser open down the sideline for a 33-yard reception. Fraser told the “Cornell Sun”, “I’m literally thinking to myself, ‘I’m going to catch the ball. Jake trusted me…and it really helped change the momentum of the game.”’

On the next play, sophomore quarterback Dalton Banks threw a 14-yard touchdown pass to junior tight end Hayes Nolte in the end zone for the latter’s second scoring catch of the season. The Big Red went up 28-24 with 4:52 left in the third quarter, and held the lead the rest of the game.

The fourth quarter saw 27 combined points. Banks opened the scoring with a one-yard run at the end of an 85-yard drive to make it 35-27, but Columbia answered back with its own 84-yard scoring drive. Another Big Play: The two-point conversion pass failed, as junior safety Nick Gesualdi stopped a shuffle pass runner two yards shy of the goal line.

Sophomore running back Chris Walker, who had a career day, countered with a 71-yard run to make it a two-score game with 4:53 left on the clock. On the home team’s next possession, Gesualdi recorded his sixth pass interception of the season.

Columbia didn’t give up and mounted a 50-yard drive that resulted with an 11-yard scoring pass to put the Lions back in the game, trailing 42-40, with 1:58 remaining. On the ensuing onsides kickoff, senior wide receiver Collin Shaw on the “hands team” recovered the kickoff. The Big Red then ran out the clock to enable the 26 seniors to always have the Empire Cup in their possession.

As mentioned above, Walker did have a great game. The 6-1, 206-pounder rushed for 230 yards on 22 carries for a 10.5 average every time he carried the ball. He scored three touchdowns.

Walker recorded Cornell’s first 200-yard rushing game since Chad Levitt hammered Yale for 218 yards in 1996, and his 230 yards on the ground were the most since Levitt ran for 246 yards vs. Dartmouth that same year. When you combine the name of Levitt and Columbia and Wien Stadium, it brings back my saddest moment in Big Red football, as in ’96 Chad ended his collegiate career with an injury vs. the Lions that left him 58 yards short of Ed Marinaro’s school career record of 4,715 yards. Levitt didn’t play in the final game of the 1996 season vs. Penn.

Banks was his usual reliable self, completing 24 of 37 passing attempts for 267 yards. Eight different players caught passes, led by senior wideout Marshall Deutz with seven receptions for 97 yards. “He [Banks] is such a mature kid for that you forget he’s a sophomore. I probably put too much on his plate in the middle of the year, so we tried to scale it back, “explained Coach Archer to the Sun.

On defense, senior OLB Jackson Weber had eight solo tackles and two assists. Gesualdi had six tackles (including the one huge one), along with his interception and two pass break-ups.

Coach Archer, as reported by the Sun in the post-game media conference, said, “We’ve had so many highs and lows this season. Recently, it’s been a bunch of lows, and to see this team respond, play like this, as banged up as they are, to come away with a victory was just a great thing to watch. I’m just really, really proud of them.”

The curtain comes down on the 2016 season this coming Saturday vs. defending Ivy League champion Penn (5-1 Ivy), a team that is still in the fight for this year’s Ancient Eight crown, along with Princeton (5-1) and Harvard (5-1). Kickoff time is Noon, and the game will be televised by Fox College Sports.