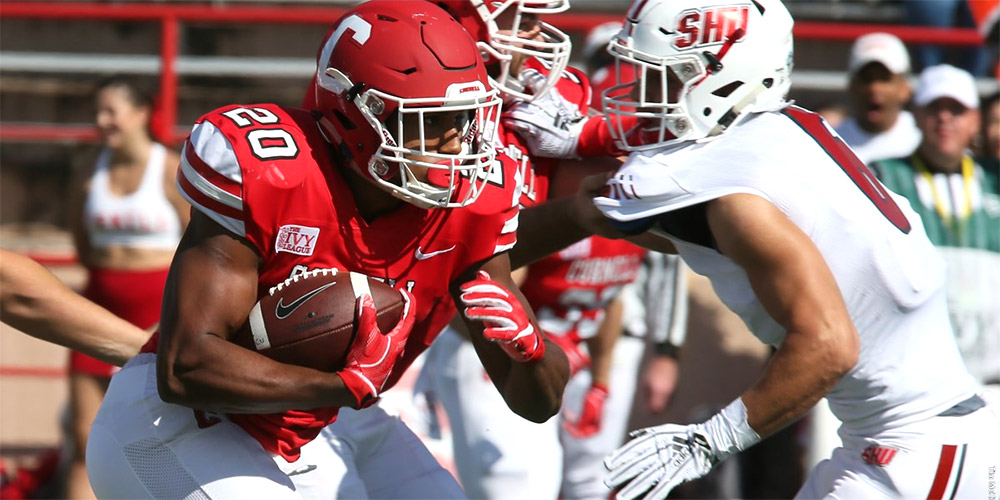 ITHACA, N.Y. – Cornell scored on every first half offensive possession and once on defense and cruised to a 43-24 victory over previously unbeaten Sacred Heart on Saturday afternoon at Schoellkopf Field to pick up its first win of the season. The Big Red improved to 1-2 on the year, while the Pioneers fell to 3-1.

Playing against a defense ranked eighth nationally, Cornell ran for 263 yards and three touchdowns and was efficient through the air, hitting on 13-of-17 passes for 161 yards and two more scores. Nearly all of that offense came after the Big Red had taken a 10-0 lead just 5:08 into the game after David Jones returned an interception 48 yards for a score to energize the crowd and his own sideline. It was the first interception return for a touchdown by a Cornell player in seven years, since Rush Imhotep took it to the house from 65 yards out in a 62-41 win over Columbia in 2011.

It was the first turnover of the year caused by the Big Red defense, but not the only one on the day. Jones had another interception, giving him five over his last four games dating back to last year. His 46-yard punt return on the ensuing drive set up the offense at the Pioneers' 30, and Dalton Banks ran in from seven yards out to make it 16-0. The Big Red was never threatened from there.

Harold Coles posted his fourth career 100-yard game on the ground, rushing eight times for 121 yards, including an 85-yard scamper for a touchdown. That run ties the fifth-longest in school history, with one of those four rushes his 90-yarder last season at Yale. He is now the only player in Cornell history to have two rushes of 80 or more yards in a career. Sophomores Jake Derderian (14 rushes, 55 yards) and SK Howard (10 rushes, 42 yards, touchdown) combined for 24 carries and 97 yards. The offensive line, which opened massive holes all afternoon in controlling the line of scrimmage, also did not allow a sack on the afternoon.

Cornell's defense ignited the offense, as the Big Red allowed just 81 yards on 23 carries in the first three quarters to effectively shut down the Sacred Heart run game, which entered the weekend ranked 22nd in the country at 232.3 yards per game.

DJ Woullard made a career-high eight tackles, had a sack and forced a fumble that was recovered by Malik Leary to round up the Big Red turnover parade. Each got the wear the turnover clock, which made its debut after two games without creating one.

The Big Red offense continued to take care of the football, not committing a turnover for the third straight contest to start the season.