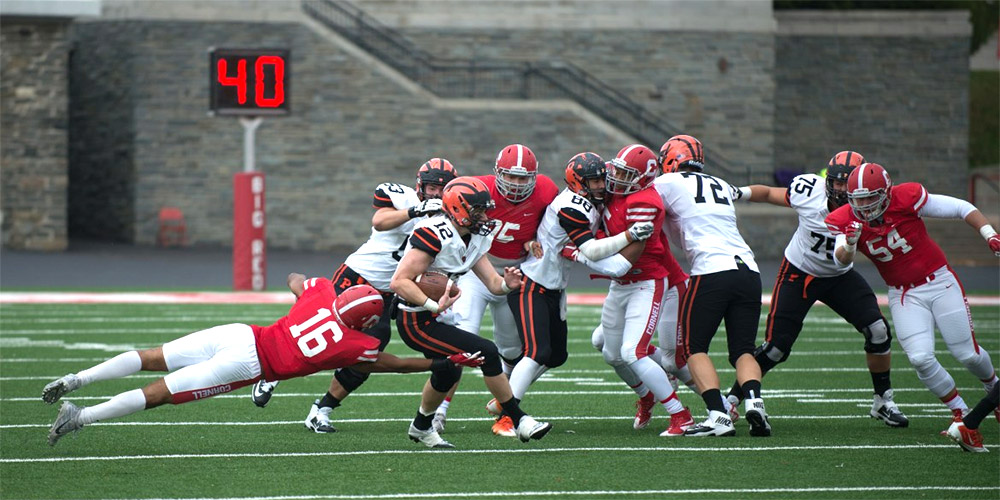 The last time Cornell football suffered a loss this demoralizing, the forward pass was not yet a legal play. Helmets were not used. The number 18 was used to refer to the first two digits of the year, not last two. The Cornell football program was just four years old.

The last time Cornell suffered a loss this demoralizing was Nov. 1, 1890 — a 77-0 thrashing at the hands of Harvard.

A year after the Red stormed into Princeton to earn an upset victory — and 128 years after that fateful Cambridge day — there was no luck Saturday, and Cornell became the latest victim of an obliteration at the hands of the Tigers, 66-0.

No. 17 Princeton proved why it was undefeated and nationally ranked in a slaughter of Cornell on Saturday. It was a blowout that was long over long before halftime and, in handing the Red its second conference loss of the season, essentially ends Cornell’s Ivy title hopes. A two-loss team hasn’t won the Ancient Eight since 1982.

“I did not see this coming. Very uncharacteristic from top down,” said head coach David Archer ’05. “We didn’t execute and play our game, but that being said, Princeton is a very good team. … It wasn’t our day and it didn’t really look like our football team out there.”

The Tigers scored three first-quarter touchdowns to go up 21-0 and added three touchdowns and a field goal before halftime to hand Cornell a 45-0 deficit. Another touchdown in the third quarter extended Princeton’s lead to 52 and one-upped the 56-7 thrashing the Tigers handed Cornell just two years ago. Two more touchdowns ended the rout.

The first, Archer said, was Banks trying to make something fit into a tight window. The second and third were ones the receivers could have had — a tip at the line and dropped ball, respectively. The last was “maybe a little careless,” Archer said.

“We wear those as a team,” he added. “Not just a quarterback.”

Lovett threw for 133 yards and rushed for 159 before being lifted for a backup in the third quarter. Princeton running back Charlie Volker had three one-yard touchdown runs in the first half. In total, the Tigers racked up 358 rushing yards.

“[He’s] a player that can create his own shot,” Archer said of Lovett, equating him to a basketball player. “He can create his own touchdown. Whatever the pay call — run, pass it doesn’t matter — he can go. And he is very elusive for his size and that player who can create his own points off the dribble. The other guys necessarily don’t need to do much, and he can score. It’s like a machine.”

Sophomore Richie Kenney, along with senior running back J.D. PicKell, lined up under center for Cornell for the majority of the second half as the Cornell continued to be unaided by the absence of junior quarterback and sparkplug Mike Catanese and his ankle injury.

Cornell originally came out first looking like it might make it a game, driving into Princeton territory on the opening drive. On 4th-and-10, Banks threw his first of four interceptions as the Red opted to keep the offense on the field.

The Red’s offense could never get its footing after the first interception. Cornell entered the Princeton red zone just once all game, but an unsportsmanlike conduct call on senior tight end Oscar Boochever brought the ball back 15 yards, and Cornell never got back within striking distance of the Tigers.

“Uncharacteristic in terms of not being able to mount the comeback that I thought we could,” Archer said.

Cornell had four unsportsmanlike conduct penalties in the contest.

“It just wasn’t us, it wasn’t our best,” Archer said before a brief pause. “Clearly.”

After senior cornerback David Jones picked off Lovett on the first drive of the second half, the reserves came in. But the Tigers were able to add 21 additional points to tie their largest win total in program history.

With the win, Princeton, 4-0 in league play, will meet undefeated Dartmouth next week in a game likely to determine the conference champion. Cornell, meanwhile, will host rival Penn on Friday night under the lights of Schoellkopf.

While a two-loss team has not won the Ivy League in 36 years, Archer said his team still has to come into next week putting it all on the line.

“[We’re going to] find out a lot about us and how we respond, but I’ve seen us respond before,” Archer said. “If there is one thing the Ivy League is right now, it’s unpredictable. We just need to keep winning every day, winning each game because who knows what this could look like three weeks from now. … History is not on our side but this is as sporadic as a league as it’s been in a while.”