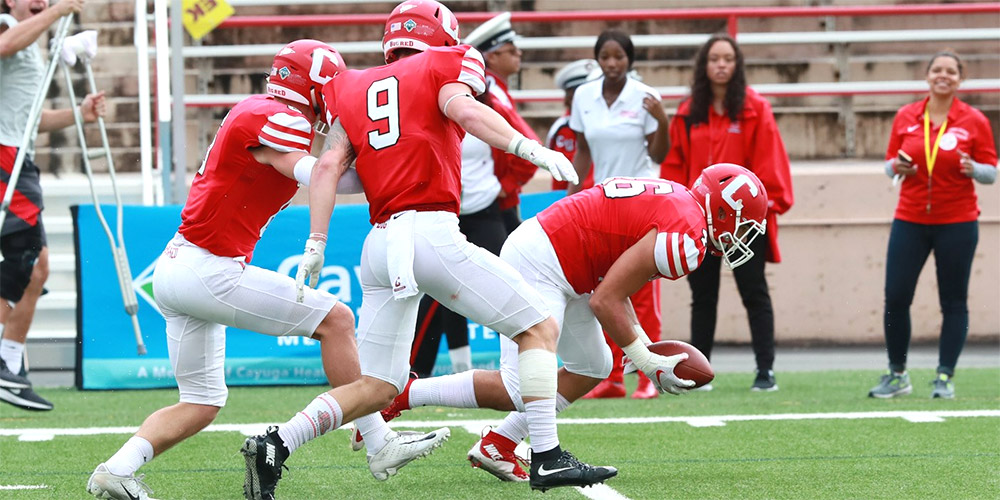 ITHACA, N.Y. – Staring at a double-digit deficit at home against Harvard for the second straight year, the Cornell football team was again undaunted. The result - the Big Red's first win streak over the Crimson this century.

Harold Coles rushed for a 34-yard touchdown, then Dalton Banks hit Owen Peters with a 33-yard touchdown pass less than three minutes later to lead the Cornell football team's fourth-quarter rally for a 28-24 victory over rival Harvard on Saturday afternoon at Schoellkopf Field. The Big Red evened its record at 2-2 (1-1 Ivy), while the Crimson dropped their second straight in falling to 2-2 (1-1 Ivy).

Reis Seggebruch led Cornell's defensive efforts with 11 tackles and two sacks, the latter of which resulted in a 10-yard loss on a third down in the third quarter. But Harvard's Jake McIntyre comfortably boomed a 42-yard field goal on the next play to give the visitors the lead, 17-14, late in the third quarter.

The Crimson then stretched its lead to two possessions for the first time with 10:13 to play on a 29-yard touchdown pass from Tom Stewart to Henry Taylor.

Both teams' defenses delivered in a low-scoring first half. Harvard scored on its first drive, then the scoreboard stayed idle until a big play by the Cornell special teams. Dylan Otolski's blocked punt was scooped up and run 15 yards into the end zone by Justin Bedard with 4:53 left before the half. Zach Mays' extra point tied the game at 7.

Both teams found offensive traction in the second half. Harvard rushed for 288 yards, led by 194 on 27 carries by Aaron Shampklin. Banks passed for 201, including 112 on five catches by Peters.

The Big Red rushing attack ground out 155 yards and a pair of scores against the nation's top-ranked rushing defense, a unit that entered the game averaging just 50.0 yards allowed per outing. Mike Catanese ran for 75 yards and a touchdown on 12 carries and Harold Coles rushed 15 times for 70 yards and a score.

The Big Red defense had three sacks, five tackles for loss and 10 breakups while limiting the Crimson passing attack to 10-of-34 for 137 yards.