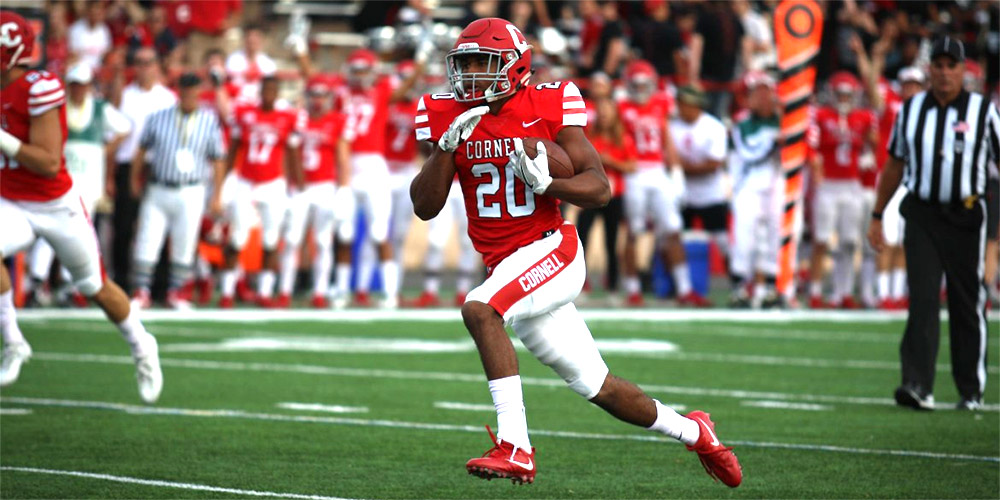 The last time Cornell football beat Brown in Providence, head coach David Archer ’05 was a sophomore suiting up for another game on the offensive line. Now on the sideline, he has led the team to a second consecutive win over the Bears.

Cornell’s decisive 34-16 win Saturday, a year removed from a 34-7 Homecoming victory, marks Cornell’s first set of back-to-back victories over Brown since the early ’90s. With the win, built on a balanced offensive attack and smothering defense, Cornell moves to 2-1 in the Ivy League and can battle for a share of the first place at Princeton next week.

“I’m proud of the whole team,” Archer said. “To win on the road in this league takes everybody: the guys giving the scout teams looks, special teams, offense, defense. I’m proud of how we all stepped up.”

Saturday’s win, however, didn’t start out smoothly. Cornell moved the ball well early on but had trouble finishing drives. Penalties and mishaps, like an interception and the Red’s first fumble of the year, bogged down the offense in enemy territory on three promising first quarter drives.

Brown scored the game’s first 10 points without doing much damage against the Cornell defense. Like most of Brown’s offense throughout the game, the first 10 points came off big plays. The field goal was set up by a long play-action pass and the touchdown came on a scorching 65-yard wildcat run by L.J. Harriott.

“We did let up a couple big plays and forced them to third down then let up a couple shots,” said sophomore linebacker Lance Blass. “There are definitely some things we’ll need to get cleaned up going into next week.”

The Red’s first score came on fourth down via a 27-yard screen pass to junior running back Harold Coles. Coles had a big day, picking up 141 yards and a touchdown on the ground in addition to his receiving score.

“Brown came out blitzing with looks we hadn’t seen on film, so once we got adjusted to that we got things going,” Archer said.

Cornell got the ball back after a stop with under two minutes remaining in the half and marched down the field. Senior quarterback Dalton Banks capped off the drive and the half with a short touchdown pass to junior wide receiver Owen Peters.

Cornell took momentum into the locker room and came back out with it, putting up a quick touchdown on the first drive of the second half to attain its first lead of the game, 14-10, and the Red never looked back.

But after the Red took its first lead, Brown showed some life. The Bears started at their own one-yard line after nearly muffing the kickoff return and marched 94 yards down the field, but a goal line stuff by the Cornell defense followed by a blocked field goal attempt let all the air out of Brown’s tires.

“The psychological effect it had on the team was huge,” Archer said of the defensive and special teams play. “They started on the one and drove the field but our defense held them on third down and then got in and got the block. It’s our kids giving max effort. That’s the way they play and that’s the way they practice.”

After the blocked kick, Cornell maintained a firm grip on the game. On the first play of the third quarter, a Brown player jumped offside and Banks took advantage of the free play to hit senior wide receiver Lars Pedersen for a long touchdown.

On top of Cornell’s aerial success, Brown struggled all game long to stop Cornell’s running backs. Coles recorded over 100 rushing yards for the fourth time in his career while sophomore running back Jake Derderian notched some crucial first downs on the ground.

“We’re just going to pound the ball and get five yards a pop then take a shot here and there and make some big plays down the field,” Derderian said. “Our strong run game propels everything else. It’s hard for defenses to game plan for a big guy like [Coles] then a speed back like me.”

Cornell’s final touchdown came on a short wildcat run from senior running back J.D. PicKell. PicKell has been taking snaps in the wildcat since junior quarterback Mike Catanese went down with an apparent leg injury against Harvard.

“There’s a guy who’s a talented kid,” Archer said of PicKell. “We want to find ways to get the ball into his hands because he does stuff with it. You saw it on the last touchdown; he made a couple guys miss and got in there.”

The Cornell defense didn’t give Brown much of a chance down the stretch, giving the Bears’ offense no room to breathe. Blass had 1.5 sacks and three tackles for a loss, part of a relentless pass rush that neutralized Brown’s run-pass-option offense.

“As long as he’s comfortable back there, any good quarterback will be able to pick a defensive secondary apart,” Blass said. “So pressure is key.”

Cornell takes on nationally-ranked Princeton on the road next weekend.