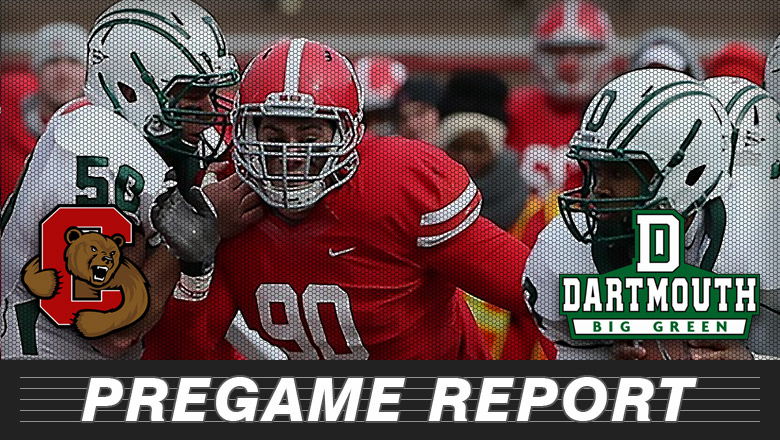 The title of this composition is stolen from the late Larry “Yogi” Berra in case you didn’t know it, but it is apropos for this week’s 100th meeting with Dartmouth at 1:30 p.m. on Saturday at Schoellkopf Field.

Last Saturday’s whipping by an excellent Princeton team was just one of those things that happen, and there is much football to still be played this season.

“Our players are playing their hearts out, and last Saturday’s debacle is behind us,” said Head Coach David Archer. “We have a lot of positive goals to accomplish in the next three games, and our guys want to see the fruition of their hard work.”

With a 3-4 overall record, the Big Red could have its first winning season since 2005 when it was 6-4, and 4-3 in the Ivy League. A win over Dartmouth would give the Red wins over the defending Ivy champion and the 2015 Patriot League regular-season winner, Colgate.

Dartmouth is 3-4 overall and 0-4 in the Ancient Eight. You ask how can the defending champion be winless? It just demonstrates how strong the league is this year. Only Harvard and Penn are unbeaten vs. Ivy competition, and they meet in two weeks. Last week, Dartmouth lost to Harvard, 23-21.

In the air, the visitors turn to junior quarterback Jack Heneghan (6-4, 225) who has thrown for 1,745 yards and nine touchdowns. His favorite target has been freshman Hunter Hagdorn (6-0, 185), who has caught 32 passes for 420 yards, although the Big Green has seven receivers with double-figure catches.

Dartmouth comes to Schoellkopf with one of the better defenses in the Ancient Eight, allowing just 19.7 ppg., and 368.9 total yards per contest. Senior linebacker Folarin Orimolade is the top defender with 57 tackles (including 10.5 for a loss), 6.0 sacks, three forced fumbles and three pass break-ups. On special teams, look out for senior defensive end Jeremiah Douchee who has blocked three kicks.

Cornell needs to get its running game going after being stuffed by the League’s No. 1 rushing defensive team, Princeton. After seven games, the Big Red has racked up just 119.1 yards on the ground per game. Sophomore Chris Walker (6-1, 206) has gained 391 yards for a 5.1 average per outing.

Banks has completed 145 of 255 passes for 1,709 yards and 13 touchdowns. A pair of seniors have been the favorite receivers in Marshall Deutz with 29 catches for 276 yards and tight end Matt Sullivan with 21 grabs for 211 markers. Five receivers have double-figure catches, and 13 players have pulled in at least one pass.

Junior safety Nick Gesualdi continues to shine and be a favorite for All-Ivy honors this season. The 6-0, 201-pounder has five interceptions in 2016, and is the team’s co-leader in tackles with 37 solos and 20 assists for a 57 total. Sophomore inside linebacker Reis Seggebruch (6-0, 235) has the same tackle stats as Gesualdi.. Cornell’s 11 interceptions in 2016 is nearly triple last year’s total of four.

Senior punter Chris Fraser has averaged at least 40 yards per punt in 34 of his last 37 games. Of his last 32 punts in five outings, Fraser has pinned the opposition back inside the 20-yard line 15 times.

This past week, the team has tapered back on the time spent on the field, which is common for this time of year. It helps to heal up some bumps and bruises, and as Coach Archer said, “We want the freshest team on the field as possible.

“I look for us to be resilient this week because we have so much good to play for,” he continued. “We have a lot of competitive athletes out there, and they know what the stakes are for us to have a good season.”