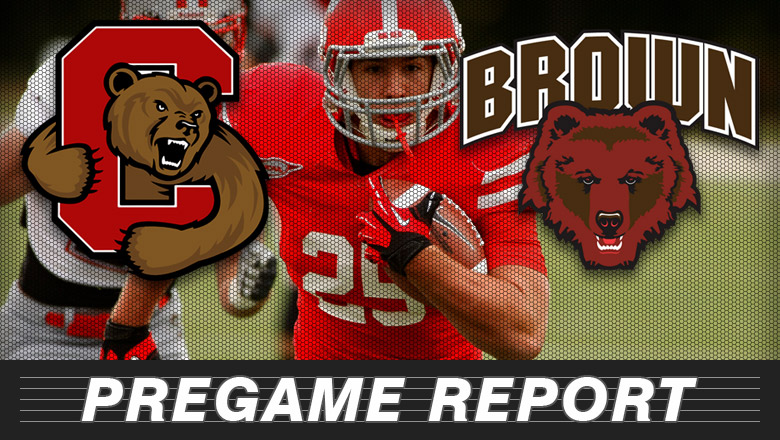 The remaining segment of the schedule is mirrored by senior punter Chris Fraser. It’s All-Ivy for the remainder of the season. Fraser, who is averaging 41.5 yards per punt, is a three-time All-Ivy selection, and is headed for his fourth honor.

The “real” season begins this coming Saturday when the Big Red travels to Brown for a noon kickoff. The game will be televised on Fox College Sports. Cornell will play against Ancient Eight competition for the remaining five games with three of the contests at home (Princeton, Dartmouth, Penn).

The Red hung tough in the second half last week, going 4-for-4 in the red zone, and scoring 24 of its points off five Sacred Heart turnovers, but lost to the visitors, 31-24. Fraser averaged 44.4 yards per attempt against the Crusaders, and zeroed eight punts inside the visitors’ 20-yard line. Three of his punts went 50 yards, including a pair of 61-yard attempts.

Taking a look at the Brown game, Cornell will be out for its first 2-1 Ancient Eight start since 2000. Brown is not the most-friendly place to play, but this season the Big Red is 2-1 on the road.

“I don’t know what it is, said Head Coach David Archer, “but we seem to play much better after halftime. We need to take a look at this, and fix it. Last year, Brown jumped out to a three touchdown lead in the first 10 minutes of the game, and we certainly don’t want to duplicate that effort.”

Last week, without its top rusher, Chris Walker, the Red chalked up 257 rushing yards, just three markers off the high mark under Archer’ regime, surpassed only by 260 yards last season vs. Brown. Sophomore J.D. PicKell led the ground assault with a career-high 95 yards on 22 carries, while classmate Dalton Banks, the QB, chalked up his best running game with 87 yards.

Brown is 1-4 overall and 0-2 in the league. The Bears are riding a four-game losing streak, which makes them extremely dangerous going into their den. Unlike most years, Brown has dominated on defense, allowing only 314.4 yards of total offense per game. It has 13 sacks and eight takeaways through five outings. Senior linebacker William Twyman has nearly doubled up on his teammates with 46 tackles, an interception and two pass break-ups.

On offense, the Bears are averaging less than 300 yards per game. Last week, in the 31-7 loss to Princeton, senior quarterback Kyle Moreno did not play, and Brown went with a Wildcat offense with senior wide receiver Alex Jette handling many of the snaps. Coach Archer said, “We don’t know what to expect because of the quarterback situation. Moreno is an excellent signal caller, and Jette is extremely dangerous when he gets his hands on the ball. Our goal this week is to just get better than the week before and the week before that.

“We have a hungry football team, and the players are working hard to get better,” Coach Archer continued. “They’re pumped because of our previous success, but know that you are only as good as your next game.”

Cornell will return home on Saturday, Oct. 29, for a 12:30 p.m. kickoff time vs. a dangerous Princeton team.